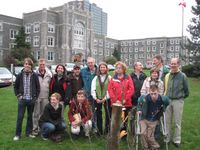 The Vorstermans family’s connection with Saint Mary’s began in 1956, when Joseph Vorstermans, his wife Jean and their five children emigrated from Holland to Nova Scotia. “What happened next is interesting,” says their eldest son, Paul, who graduated from Saint Mary’s in 1966 with a Bachelor of Arts in Political Science. “Our dad had a PhD in economics from Holland, and had come to Canada to set up a plant for a Dutch company. When the venture failed after two years, my mother suggested he talk to the President of Saint Mary’s University about taking courses to gain some Canadian experience.”

Instead of offering advice, Saint Mary’s President, Reverend Patrick Malone, S.J., offered a teaching position, and an association began that lasted from 1957 until Joseph’s retirement in 1985.

“Any students in the Commerce department during those years would have had my father as a professor for Econ 201,” says Paul’s younger brother, Joe BA’66. “He was a teacher in the old mould, and a tough marker. His style would have been appreciated by the serious students but not so much by the rest.”

With Joseph Sr. immersed in his teaching career, his wife Jean enrolled in the first of many non-credit courses she would take at Saint Mary’s. “She studied everything from great books to French conversation,” says Paul. “With five kids at home, I’m sure she welcomed an evening out.”

Paul spent seven years at Saint Mary’s, including three at the high school. During his university years, he took two courses from his father. “He played no favourites,” recalls Paul. “One time I fell asleep at the back of the class and he threw a piece of chalk at me.”

Paul’s brothers Frank BA’69, Luke BA’71, and Joe also attended Saint Mary’s. Their sister Margaret completed a Nursing degree at Mount Saint Vincent University, where Dr. Vorstermans taught part time in the 1960s. Not to be outdone by four Saint Mary’s alumnus siblings, Margaret did her own part to maintain the family connection by marrying Lou Airoldi BA’68, an American athlete who attended Saint Mary’s in the 1960s and played football and basketball for the Huskies.

None of Joseph and Jean’s children remained in Nova Scotia. Frank married Saint Mary’s alumna Wendy Pottie BA’71 and moved to Alberta. Luke is in British Columbia. Joe and Paul are in Ontario, and Margaret lives in Georgia.

Jean Vorstermans passed away in 2006. Three years later, her five children returned to the Saint Mary’s campus, accompanied by their spouses, children, and grandchildren. On a warm afternoon in June, they planted a magnolia tree in their mother’s memory on the lawn in front the McNally Building. Just 50 metres away is the driveway where Dr. Vorstermans parked his old green Dodge for many years.

Photos of the ceremony show a large, extended family linked by memories of Saint Mary’s. Deeply rooted in this history, the magnolia continues to thrive as a living memorial to Jean, and now, also to Dr. Joseph Vorstermans, who died peacefully in his sleep on June 15, 2013. He was 95.