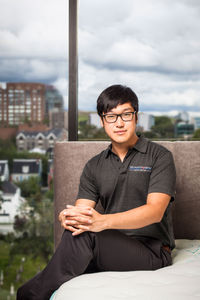 Once Upon A Mattress

There’s a fairytale quality to Chen Qing’s success selling mattresses—but there’s nothing long ago and far away about the way the young Business Management major parlayed two free movie tickets into a Halifax-based business worth more than $200,000.

The story begins only five years ago when a 19-year-old from China arrived in Halifax to attend the Sobey School of Business.

“Someone gave me tickets to the movies,” says Qing, who graduated from the Sobey School in 2014 with a Bachelor Degree in Commerce. “I didn’t have anyone to go with, so I sold them online.”

Buoyed by the speed of the sale, Qing tried his luck with other unwanted items—at first making a modest profit by posting them on a Kijiji-like website that’s specifically geared to Chinese students. The pot of gold came when he purchased a used mattress for $20 and flipped it online for $140. “University students need mattresses,” he says. “I could have sold that mattress many times.”

At first, the mattress makers worried about volume and credit. “I showed them my sales records and told them I’d pay up front,” says Qing. Next, they worried that he would return to China as soon as he graduated. “I told them I plan to stay here.”

In time, Qing persuaded the eastern Canada sales representative for Simmons Beds and Mattresses to give him a chance. “You really blew our minds,” a Simmons executive told Qing. “This is the first time in 140 years of business that we have agreed to supply someone who has neither a store nor a showroom.”

With Simmons on board, Sealy and other big mattress companies followed. Qing now has five employees and conducts his sales in Chinese, Korean, Arabic, Indian, and English. His company, Hometown Mattress Limited, carries 13 models of mattresses and sells hundreds each year, primarily in the fall, and largely to students at Saint Mary’s and other universities in Nova Scotia. “University students call me the Mattress Man,” he says with a grin.

Despite a surge in business, and sales that have doubled every year, Qing continues to display his products in the spare bedroom of his 10th-floor penthouse apartment.
Stock sits nearby in a 4,000-square-foot warehouse he rents. “I’ve considered leasing a storefront for sales,” he says, “but I’d have to raise prices in order to cover my costs.”

In Qing’s experience, customers are looking for quality, price, service and brand names they trust. And, in true fairy tale fashion, they’re keen to test the relative comforts of mattresses before they make a commitment. “If I can offer all of that,” asks Qing, “what does it matter whether my showroom is in a store or a penthouse?”

Success with mattresses encouraged Qing to branch out into other home furnishings: items he also displays in his own apartment. “As the business grew, my parents worried that it would interfere with my schoolwork,” he says, “but I was able to balance full-time school, full-time work, and still have time to get involved in other campus activities.”

“University students call me the mattress man; I like the name.”

In extra-curriculars, as in business, Qing went full-tilt during his time at Saint Mary’s, throwing his hat in as class valedictorian, and representing the University at the Enactus Provincial Championships for Nova Scotia in the spring of 2014. “I prepared for two months to give a speech in front of 18 judges,” he says.

The practice in public speaking will come in handy when he tries to convince the Canadian government to waive a rule that would force him to abandon his own business—and his employees—and work for someone else for one year to qualify as a permanent resident. “I can’t get into this immigration business until after the crazy back-to-school season,” he says.

Qing doesn’t hesitate when asked how Saint Mary’s contributed to his success. “I became part of a community and gained many valuable contacts with students from different cultures,” he explains.

He’s also quick to offer advice to other aspiring entrepreneurs. “Starting a business is one of the toughest things in the world,” he says, “but you won’t get tired if it’s something you love. Some people like playing video games. I like doing business.”

Behind the Seams ►
◄ Boomer Town