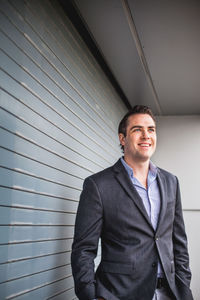 Something to Talk About

What scares you more: Running into a bear, or public speaking?

There was a time when Matthew Fanning dreaded public speaking.

“It’s not unusual,” says Fanning, a Finance major who graduated from Saint Mary’s University in 2008 with a Bachelor of Commerce degree. “Most people would rather encounter a grizzly bear than stand on stage to deliver a speech.”

What is unusual is that after working for a few years, first as a personal trainer then as a sales rep for a medical supply company, Fanning set out quite purposefully to overcome his fear of public speaking by attending Toastmasters, a non-profit educational organization that teaches public speaking and leadership skills through meetings held around the world.

“Toastmasters took me out of my comfort zone and gave me an edge,” says Fanning, who was born and raised in Lower Sackville, NS. “Employers clearly value communication skills and I was in an extremely competitive job market.”

Inspired by his own growth as a public speaker, Fanning developed an e-learning tool that’s designed to help students communicate confidantly with everyone from friends and family to colleagues and employers. Launched in 2013, Presenters Podium does far more than improve public speaking skills: it also engages students more thoroughly in course material, and provides an opportunity to learn by doing. “That’s how we learn best,” says Fanning, who is the President and Co-founder, “by making mistakes and receiving feedback.”

Speaking from experience, Fanning describes what he sees as the fatal flaw in delivering information through the traditional lecture format. “Our attention wanes after about 10 minutes,” he says. “In high school and university, I really tried to pay attention in class, but my mind would wander and I’d end up missing something important. More often than not, I relied more heavily on my textbooks than what the teacher said in class.”

Determined to improve the situation, Fanning identified a target market of innovative professors at Saint Mary’s and asked them to try Presenters Podium. “First I approached Dr. Ellen Farrell,” he says. “I never had her as a teacher, but she has a reputation for innovative thinking and supporting students. If you’re interested in launching an idea, she’s the one to see.”

After doing what Fanning describes as “due diligence,” Farrell agreed to pilot the program in one of her classes, and with her on board, Fanning had soon reached a similar agreement with other professors. “I played the alumni card,” he says. “Saint Mary’s has a high number of proven innovators and I wanted their opinion.”

The cloud technology behind Presenters Podium is complex, but the premise is amazingly simple. Professors upload questions and topics created specifically for their courses, students prepare presentations on these topics, practice online, record their presentations, and hit “go.” Evaluation comes from professors and small groups of classmates assigned for each topic. Because it all happens outside class time, professors are able to create many opportunities for students to practice and improve.

At first he wasn’t sure how well the program would work, but feedback from students quelled any doubts. “The results are amazing,” he says enthusiastically. “Even students who are very fearful and nervous about speaking in public have emerged from the program with confidence.”

Not only do students say that they find it easier to convey their ideas, but by conveying these ideas to members of their group—essentially teaching their classmates—they master the material in a deeper way and come away from their courses with a greater understanding of theoretical concepts. “And the side benefit,” adds Fanning, “is that by working in small groups, the students really get to know each other and support each other’s learning—something that improves student retention.”

The 29-year-old admits that Toronto had some attractions as a home base, but says that Nova Scotia makes more sense. “We have a huge education presence and universities like Saint Mary’s that top Macleans magazine’s annual list of top 10 schools.”

Fanning and his team are presently developing additional platforms to support in-class instruction and help students build confidence in other areas that determine success. They are also planning to extend Presenters Podium beyond the Maritimes. “Education has to change in order to respond to employers’ demands,” says Fanning. “Our platform helps students develop and refine their oral communication skills, but it also enhances ‘must-have’ employability skills such as critical thinking and problem-solving.”

All in all, it’s an attractive proposition, and one that Fanning is happy to talk about—even on stage at workshops and conferences. Now, he says with a grin, “I actually look forward to it.”

Boomer Town ►
◄ The Next Level