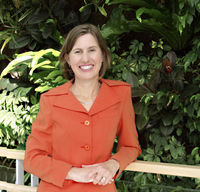 A Passion For Education

The story of how Jillian Gibson came to be the Director of Philanthropy at Saint Mary’s University began last spring with two phone calls—one from her niece in the Bahamas, the other from a recruitment agency.

Her niece was calling about her university plans. It had long been understood that she would come and live with the Gibson family in St. John’s, Newfoundland where she would attend university with Jillian’s daughter. They would go to Memorial University of Newfoundland (MUN) where Jillian had worked as a development officer since 2009. On the phone that day, her niece told Jillian that she had been accepted at Saint Mary’s University, explaining that she had only applied as a backup option because another cousin in the Bahamas had a really good experience there.

The second phone call came two days later. Jillian was at work when a recruitment agency contacted her on behalf of Saint Mary’s to gauge her interest in the Director of Philanthropy position. Jillian wasn’t looking for new work; she had just closed a successful $5 million campaign for the Faculty of Medicine and was happy in her role at the university.

“I wasn’t seeking anything in any way when they called me, but when I heard it was a position at Saint Mary’s, I was intrigued by the coincidence and out of curiosity asked them to tell me about it. It all started there!” laughs Jillian.

The St. John’s native has always had an interest in exploring new things. After finishing high school in 1989, Jillian moved to Ontario to go to the University of Ottawa, where she graduated with a BA and BEd in French education in 1993. Inspired by her aunt Maxine, who lived in Puerto Rico, Jillian began applying for jobs in the Caribbean, moving to the Bahamas to work as a French teacher at a private school in 1994.

Marriage and children followed until one summer 10 years later, frustrated by the lack of organization in the school’s fundraising efforts, Jillian decided to put together a proposal—a roadmap for how the school could be more strategic with their fundraising appeals.

“To this day I can’t say why I took my summer holidays to write a fundraising proposal when I had no experience in that area,” Jillian says. “I just saw a need.” The school administration loved the proposal but didn’t have the resources to take the initiative any further. But then another Bahamian school heard about Jillian’s ideas and asked her to help them do fundraising.

Since then, development work has been the focus of Jillian’s career, supporting and expanding her passion for education.

Moving to Halifax was a big move for the new Director of Philanthropy and her family, but already Jillian feels a sense of belonging to the campus community of Saint Mary’s. “I didn’t feel like a stranger who had to try and blend in. So many people here at Saint Mary’s are from somewhere else, with a different culture and different background. Yes, I’m new here but I’m just like everyone else,” she says. “One university, one world. I actually felt that, in just one day.