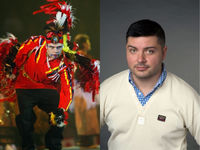 Raymond Sewell, Indigenous Student Advisor, in full regalia at a powwow (left) and as he appears when you drop by to visit at his Burke Building office (right).

An Open Door for Indigenous Students

Raymond Sewell has a brimming schedule in his role as the university’s first full-time Indigenous Student Advisor, but you can be sure that he’s always got the door wide open for anyone who needs him. From his office at the Saint Mary’s Burke Building, he gestures to the swell of students passing by. “They come in and tell me about their day and get the support they need,” says the 34-year-old from Pabineau First Nation, a Mi’kmaq community outside Bathurst, New Brunswick.

Sewell MA’14 took on the job in September 2017. The position was created in response to the federal Truth and Reconciliation Commission report and Saint Mary’s 2014 Indigenous students task force report, commissioned by then-President Colin Dodds after the murder of Saint Mary’s student and Labrador Inuk woman, Loretta Saunders.

Sewell sees his role as a way to provide Indigenous students with support from someone who has struggled as an Indigenous student. “A lot of us come from small communities.” Pabineau First Nation was no exception, with a population of 200. When Sewell moved to Halifax in 2003 for his undergrad, he was pretty timid. “I am not shy to meet people, but I am shy to ask for help.” He had a hard time even booking appointments for the supports he needed. His wife, Nikki, was the one who had his back, all through his undergrad and his Master of Arts in Atlantic Canadian Studies from Saint Mary’s.

“If you’ve got someone supporting you,” he says, “it’s a lot easier.” Now he fills that same role for others—understanding where Indigenous students have come from, hearing what they need to succeed, and helping them get it. Sometimes the challenges students face are academic, such as needing direction to the writing centre; sometimes they’re administrative, like accessing healthcare or applying for bursaries. Sometimes, students just need to chat about adjusting to life in K’jipuktuk (the Mi’kmaq name for Halifax that translates as “big harbour”). Elora Gehue BA’17 knows well how much Sewell adds to campus, and how much those simple chats he has with students matter. She agrees that the biggest barrier for Indigenous students is finding a sense of community.

“That door needs to be open,” she says.

Gehue says starting out as an Indigenous student at Saint Mary’s was “pretty tough.” Though, the Mi’kmaw woman from Indian Brook believes she had an easier time than some others because she comes from a mixed family. “I don’t look like an Indigenous woman.” That cultural disconnect, she says, “didn’t affect me as much as it might have affected someone who had just come from the reserve.”

Still, she says, being proudly and visibly Indigenous on campus should be valued and respected. “No one should have to remove part of themselves in order to fit in.” Gehue graduated a year ago with a Bachelor of Arts in International Development Studies and Sociology. She is now pursuing a Bachelor of Education degree at Mount Saint Vincent University, but she misses her alma mater. She stays in the mix by devoting time to a seat on the Saint Mary’s Alumni Council.

During her undergraduate years, the role of Indigenous Student Advisor was part-time and student-run. It was something, but Gehue says it wasn’t enough. With Sewell’s new full-time, permanent position, students are better served, she says, and, crucially, it shows commitment from the highest levels of Saint Mary’s administration in helping address the different needs of Indigenous students.

Gehue adds that the ongoing work on the task force report recommendations is making a real difference in how Indigenous students see themselves reflected on campus. This past October, the Mi'kmaq Grand Council Flag was raised on the McNally Building flagpole in recognition of Mi’kmaq History Month. Millbrook First Nation Chief Bob Gloade was voted onto the Saint Mary’s Board of Governors, and the university is verbally acknowledging the school’s location within Mi’kmaq territory at campus events. It’s showing that the school understands that while non-Indigenous students have long been able to see themselves everywhere—in faculty and administration, in the plaques and paintings that recognize important alumni and donors, and even in how and what programs have been developed—Indigenous students do not.

Sewell says these concrete recognitions of the importance of Indigenous culture and the tangible supports for students show that Saint Mary’s is serious about Indigenous students. “That’s what I see—that indigenous students are being valued and welcomed. There is a lot more open dialogue.”

After all, he says, “we are building a community.”