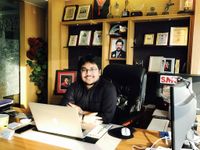 When Bangladeshi-born Salman Bin Rashid Shah Sayeem was living in Halifax and studying Accounting at Saint Mary’s, he couldn’t help but notice the different ways that Canadians could book travel. “In Bangladesh, we didn’t have any online ticketing options for air travel, but when I was in Canada I would hear things about Expedia and Cheapoair, and it really got me thinking.”

Subsequent conversations with his businessman father, and some research, led Salman Bin Rashid to realize the idea of an online travel agency option in his home country was one worth exploring. After graduating with a B.Comm last October, the Saint Mary’s graduate returned to Bangladesh, began to build a team, and decided to go for it.

They named the business Flight Expert. It is Bangladesh’s first online travel agency where people can book air tickets and hotels using their local credit or debit cards. To say it’s taken off is an understatement. Even Bin Rashid is astonished by its rapid growth.

“We’ve only been in business six months, and we’re now listed as Bangladesh's second largest e-Commerce site.” He adds that Flight Expert already has alliances with 625 worldwide airlines and 250,000 hotels and has recently been promoted by American Express and VISA. “All this has happened in such a short period of time, and it’s my sense that the future potential of this company is huge.” In fact, Bin Rashid is currently planning an expansion to Canada.

This will mean more travel back to Halifax and visits with great friends and favourite professors at Saint Mary’s – something he’s enormously excited about. “I’ve travelled to more than 30 different countries all over the world, and I’ve seen many different cultures and met all kinds of people. But I’ve never experienced anything like Halifax and Saint Mary’s. It is truly something special – a place where I felt respected as a human being and where race and culture didn’t matter.”

When Arman Mohammed first heard about Saint Mary’s, he still lived in Dhaka, the largest city in Bangladesh. At that time, he would have no way of knowing that less than a year later, he would crawl inside a warm, fuzzy Huskies mascot outfit and proceed to dance, jump, and fist pump for the benefit of loyal Huskies fans. This is just one of the many ways that Arman became involved in campus life. He also worked as an RA, was involved in the International Center as a volunteer, and acted as an Intramural Coordinator with the Athletics Department.

By the time he graduated in 2012 with a BComm in Marketing, he was madly in love with Halifax and decided to stay. He worked a few jobs in banking and sales, and as a self-described “foodie,” enjoyed the restaurants and food trucks that Halifax had to offer.

A bit disillusioned with the 9-5 life, Arman realized he was drawn to entrepreneurship. The only problem was that his permit status in Canada wouldn’t allow him to explore that route. He decided to return to Bangladesh, where he could test out a small business.

While it was hard to say good-bye to Saint Mary’s and Halifax, Arman was excited to be his own boss. He started with a small food cart in 2014 that sold poutine on the streets of Dhaka. “The experience helped me begin to learn the food business and also helped me realize that this could become my career.” He was fortunate to meet a kindred spirit and together they took their food carts one step further and opened a restaurant, called Madchef, the next year.

Madchef is all about burgers and has quickly grown to four outlets in Dhaka. The restaurant is widely considered to be one of the top burger joints in Bangladesh and recently won a FOODIEZ choice Award.

Proud of their unique product and strong brand name, Arman is now venturing into the canteen business at local schools and universities. He hopes Madchef will one day go international. In the meantime, he still keeps in touch with Saint Mary’s, particularly the recruitment office, and recently held a recruitment event at one of his restaurants in Dhaka.

“I feel very positive about Saint Mary’s and Halifax and like to spread the word to potential students here,” he says. “I tell them how life abroad can expand your experience and perspective and really enhance your sense of what is possible.”