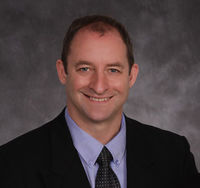 Driving change and giving back

For as long as he can remember, Jeff MacLean dreamed of being both an engineer and a leader. “My experience of good leaders was that they made such a positive impact—for families and communities, and also for employees, wherever they worked,” says the Saint Mary’s alumnus. “I wanted to do that.”

The President of Michelin North America (Canada) Inc. was raised in Port Hawkesbury, Cape Breton, until he was 12 years old. Then, when his older siblings flew the nest, MacLean’s parents decided it was time for them to make some moves in life. “Being the baby in the family, when my parents started to do some of the things they had dreamed about, I was along for the ride.” This meant they moved around a lot—after Port Hawkesbury was junior high in Chester, Halifax for high school, and then back down the South Shore.

As a result of seeing so much of Nova Scotia, MacLean feels he is a true Bluenoser. Although he appreciated the diversity of experiences he was exposed to, he really wanted his children to have a solid and steady hometown experience. Halifax has absolutely become that hometown and Saint Mary’s played a big role in building that foundation.

It all started when he chose to study at SMU in 1981. Originally lured in by the Huskies Football Program, MacLean also came to be involved in many other aspects of university life. In addition to his four years of varsity football, he was an AUS track and field champion, played rugby, acted as a residence don, and was the President of the student Engineering Society. “There weren’t a lot of engineers playing football, so it was fun to bring those cultures together,” he says. “I’m a bit of a high-energy guy so all those activities kept me very focused.”

Thriving on this unique blend of activities was MacLean’s first indication of how much he valued variety and different experiences. “That mixture of heavy academics, with both varsity sport and student affairs involvement helped me grow as a person,” says the 51-year-old. “Those experiences were really pivotal too, in terms of multi-tasking and dealing with diversity. I encountered all kinds of different and wonderful human energies, whether it was on a playing field or in a boardroom or a classroom.”

In 1985, with a Bachelor of Science and a Diploma in Engineering from Saint Mary’s, MacLean entered the Technical University of Nova Scotia to complete his Engineering Degree. It was here that he had his first encounter with Michelin when he became one of their co-op students in his first year. It went so well that he was immediately recruited upon graduation.

We take pride in developing and supporting our people and growing our leaders.

As one of the largest tire manufacturers in the world, Michelin relies on its co-op program as an essential recruitment strategy. The company employs 3,300 employees at three tire-manufacturing facilities in Nova Scotia and have a solid reputation as a loyal and caring employer. In fact, the company has an attrition rate—other than retirement—of less than one percent. “We take pride in developing and supporting our people and growing our leaders,” says MacLean. “People who come to Michelin generally stay for 30 years or more.”

It wasn’t that the Saint Mary’s graduate didn’t have other options upon graduation. He had offers with both Mobil Oil and Northern Telecom, but decided to stay in the place that was home. “I thought that too many of us were moving to other parts of the world and I stayed to be in Nova Scotia,” he says, adding that it’s worked out, both personally and professionally.

Kids are important to MacLean and he is actively involved in other children’s lives as well, largely through coaching sports. He was named one of the top ten amateur football coaches in Canada in 2012 and tries to stay as active as he can with the kids in his community. “Our kids have huge capabilities and I want to make sure they get the opportunities they deserve,” he says. “Often that comes through the adults that reach out to them and encourage them.”

Encouragement and caring is a definite theme for MacLean. It’s one of the reasons he was so honoured to receive the Business Leader of the Year Award from the Chamber of Commerce last year. “That was a very special award for me because we were nominated by the local community, during a time when we had to announce that we needed to downsize.” To be nominated for an award during a time of lost jobs is unheard of, but community members stated that they felt Michelin had acted with great integrity and caring.

It’s the main reason MacLean has been loyal to the company that gave him his first job. “Their values are solid and strong. They treat their employees exceptionally well and they do good business in our province, our country, and the world,” he says. “They also encourage people to stay and work here in Nova Scotia and I think that’s vitally important right now. If true leaders can stay here, together we can drive change and create a better province for all.”

IDS Program Embraces the World ►
◄ Strength on the stick