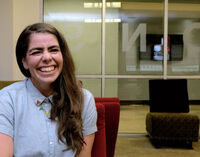 What does a master chef like to eat when they’re not the one doing the cooking?

If that chef is Jennifer Crawford MA’07, winner of CTV’s 2019 MasterChef Canada amateur chef competition, the answer is simple.

“Treat cereal and Three-Cheese Pizza Pops. These were special occasion foods when I was a child.”

Crawford—who is non-binary and uses they/their pronouns— won over the judges during a gruelling twelve-episode season culminating in a three-hour, three-course finale on June 10th. Their final dessert invention? “Elevated treat cereal”: a bowl of hand-puffed rice, cocoa soil, ganache, marshmallow, a sugar-cured yolk and tea-smoked milk. A stellar performance on the show propelled them to an emotional victory and a $100,000 prize.

For Crawford, a lifelong lover of good food, the win is a testament to the magic they experience when preparing meals for others, something they’ve always relished.

“I used to host an experimental supper club out of my house, and I’ve hosted homemade ice cream socials with experimental flavours. After a decimating experience with PTSD, cooking helped me to rebuild my creativity and gave me confidence to audition for MasterChef. My recovery became my superpower.”

One of the talents required of a chef, according to Crawford, is a high degree of resourcefulness and the ability to use a limited number of ingredients to create something unique.

“Good cooking is about the level of love and skill, not expensive ingredients. Creativity comes from limitations—having limits frees the brain. Michelin chefs often impose artificial limits on themselves to inspire creativity in the kitchen.”

As a kid growing up in Kingston, in Nova Scotia’s Annapolis Valley, Crawford learned about making do with limited resources. They would often gather berries near the railway tracks when they got hungry instead of heading home for a snack.

They credit their versatility in the kitchen to these early experiences: “My imagination was born from my rural upbringing—how I make my fun is from my imagination.”

For Crawford, creating inspired meals from scratch is a profound and emotionally satisfying experience.

“Food makes my day better. It has the capacity to strike to the heart of what matters to people—for me, those things are joy, love, being silly. I enjoy helping people experience vulnerability, watching their faces light up like kids when eating one of my meals. The judges did that…”

After a decade of working as a government policy analyst in their adopted home of Toronto, Crawford has dreams of returning to Nova Scotia to open a rural “Supper and Sleep,” an idea they hope to bring to fruition in 2020.

It’s been a long and meandering journey from Crawford’s days as a graduate student at Saint Mary’s, where they were enrolled in the Atlantic Canada Studies programme, graduating with a Master’s degree in 2007.

“Jennifer was a sheer pleasure to work with, and possessed a creative energy and passion as an RC.  Jennifer also liked to think outside the box and try new things. I saw this translate into their cooking on the show each week.”

Kilfoil followed Crawford’s progress on MasterChef with keen interest and rejoiced when her former employee made it all the way to the season finale. When the two connected again after the show was over, Crawford joked, “I’ve come a long way from bananas and peanut butter on toast at the caf!”

He recalls his former student as both “widely read and politically engaged,” making them something of a rarity on campus.

The pair shared an interest in the areas of health, gender, and sexuality. Crawford’s thesis looked at the early days of sexual health education in Nova Scotia, a topic often steeped in controversy. Twohig saw his role as supervisor “to guide Jen through their work in terms of thinking of the deeper political issues and meanings around sexual health education.”

Crawford’s thesis subject proved timely: in 2004, the Nova Scotia Department of Education had  unveiled its new sexual health curriculum, offering public school students in the province a much broader exposure to the range of human sexuality than its predecessors. Because the focus of the document was not primarily reproductive, many school boards rejected the document, some teachers refused to teach from it, and there was a public outcry against it.

“The reproductive focus [in a sex education curriculum] is of course a political question and Jen was able to unpack that as part of their research. Their level of political engagement was distinctive and memorable from a professor’s point of view. I’ve had many great students, but I don’t often get ones who are deeply politically committed to the work that they’re doing.”

In addition to their studies, Crawford also served as a volunteer coordinator for the SMU Women’s Centre at a time when the Centre was struggling to survive. Twohig recalls being impressed with Crawford’s commitment to women’s issues on campus in the days before the #metoo movement:

“They did a lot of the grassroots political work to build it back up.”

Twohig says he was surprised to see his former student on television.

“I had no idea they were so interested in cooking, food, and food culture. I would sometimes see them in the ads for MasterChef and say, ‘That’s Jen!’”

What shouldn’t surprise anyone is that a person with Crawford’s energy, passion, and creativity would go far in life. Their MasterChef experience is a testament to the value of commitment and sheer hard work.

Or, in Crawford’s words, “Being able to trust that if you try your hardest, something’s gonna come up Jennifer!”

“Our job is exposing people to what can be and what’s possible” ►
◄ SMU Professor Wins Prestigious O. Henry Prize for Short Fiction