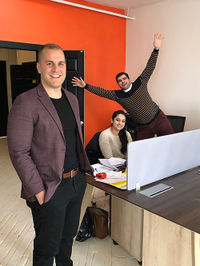 Josh Domingues BComm’13 and two of the staff at Flashfood, in his new offices recently opened in Toronto.

It’s January 2016 and Josh Domingues is up to his chin in paperwork at his wealth management company in downtown Toronto. His phone starts ringing and he picks it up to hear his sister Paula, a chef who freelances for catering companies, choking up with tears. “What’s wrong?” he asks. She explains how upset she is that her boss demanded she throw away $4,000 worth of uneaten clams after an event.

“But I could have given those leftovers to homeless people nearby,” she told Domingues, who graduated from SMU with a Bachelor of Commerce in 2013.

“Paula was so frustrated, she ended up leaving this company because she couldn't deal with throwing out perfectly good food on a regular basis,” Domingues, 30, says. “Her frustration inspired me to look into the issue of food waste.”

A short time later, he quit his job to launch a mobile app called Flashfood. It works by alerting consumers to food at restaurants and grocery stores that would otherwise end up in the trash. Grocery and restaurant staff can snap a photo of food that's close to its best-before date, offering it at a steep discount (at least 50 percent off), and alerting app users via notifications of the grub that's up for grabs.

If you turn on notifications for a grocery store or restaurant near where you live, or a specific type of food—say, pastries or meats—your phone will be pinged when that restaurant or grocer has the item you're after for sale. You can then view the photo, a description of the food on offer, and what it's selling for. After paying with a credit card, you're given a confirmation code to show the retailer, and the goodies are yours.

To date, Flashfood has sold more than 75% of the products made available through its platform.

Flashfood first worked with Farm Boy, a grocery chain in Ontario, but when Sobeys acquired Farm Boy, that pilot trial ended. Thankfully, other grocers took notice of Flashfood’s innovative idea: in August 2018, Flashfood partnered with two Loblaws companies, Superstore and No Frills, running pilot programs in three London, Ontario stores.  The program was then extended to another store in Oakville, Ontario.

In March 2019, Flashfood announced a deeper partnership with Loblaws, making its discounts available in the grocery chain’s Quebec divisions, Provigo and Maxi.

Domingues notes: “Our partnership with Loblaws validates the value of Flashfood working with large-scale grocers.  We're able to significantly reduce a retailer’s shrink in a profitable way while having an incredibly positive environmental impact.” (In retail terms, “shrink” refers to the loss of inventory that can be attributed to factors such as employee theft, shoplifting or, in this case, throwing out food).

The issue of food waste is only getting more pressing in Canada. A staggering 58 per cent of all food produced in Canada — 35.5 million tonnes — is lost or wasted, according to a new report from Toronto-based social services agency Second Harvest.

“Our goal is to end hunger,” Domingues says. “I know it sounds crazy, but by utilizing the sharing economy and creating a sustainable company, I believe we can expand our service to the point where we can help those less fortunate.”

More good news came in 2019, when Flashfood announced it raised an undisclosed venture round lead by General Catalyst.

Domingues attributes one particular class at SMU for giving him the seed of an idea he later brought to market. “I remember taking an entrepreneurship class where we had to come up with our company idea, and I thought of something called CheapEats. I got coupons from local restaurants and made a coupon booklet for students to use, and then tracked how many people used those coupons. Fast forward three years after I graduated, and I tweaked that idea a bit after that phone call with my sister and Flashfood was born.”