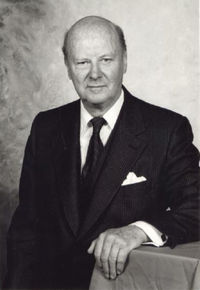 The Sobey family connection and generosity to Saint Mary’s University began in 1975 with Frank H. Sobey, the entrepreneurial visionary who built a grocery empire from a meat delivery service established in Stellarton, Nova Scotia by his father, John William (J.W.) Sobey. After a request from Robert Burns (R.B.) Cameron Sr., philanthropist, industrialist, and good friend of Saint Mary’s, Frank made the first donation from Sobeys stores to the university. He later went on to sit on a campaign advisory board and serve on Saint Mary’s University’s Board of Governors. The university acknowledged his many accomplishments, business innovation, and community service by awarding Frank an Honorary Doctor of Laws in 1979. The Faculty of Commerce was renamed the Frank H. Sobey Faculty of Commerce in the early 1990s.

The Frank H. Sobey Awards for Excellence in Business Studies were established in 1989 as another tribute to this important relationship and as a compelling way to encourage entrepreneurship. Now valued at $25,000 each, these prestigious awards recognize top business students from all universities in Atlantic Canada. Eight awards are presented each year and competition for the scholarships is fierce. The Sobey School of Business is proud to have had 26 of their students claim these prizes since 1989.

When Frank passed away in 1985, Saint Mary’s received a generous bequest through his estate. The greater gift, however, was the encouragement Frank gave his children and his grandchildren to connect with and support Saint Mary’s. Many members of the Sobey family are graduates of Saint Mary’s, and over the years, the family’s volunteer commitments and charitable contributions have made an enduring mark on the University, with transformative gifts for academic programs, student financial aid, and infrastructure.

The University has also benefitted from the long-standing support of Empire Company Limited, Sobeys Inc., and the Sobey Foundation, founded in 1982 by Frank and his three sons, David, Bill, and Donald. The Atrium and Global Learning Commons, for example, received $400,000 through a $2 million gift to the Hearts & Minds Capital Campaign from Sobeys Inc., Empire Company Limited, and the Sobey Foundation. The remaining $1.6 million of the gift went to establish two major endowed student awards: Sobeys Leadership Awards and Sobeys Scholar Awards. Since their inception in 2006 and 2007, respectively, these awards have disbursed a combined total of more than $570,000 to deserving students in the Sobey School of Business.

Another milestone was reached in 2005 with a personal pacesetting campaign gift from Dr. David Sobey. Speaking on behalf of the student body, student union president Zach Churchill, now Nova Scotia’s Minister of Education & Early Childhood Development, was effusive in his thanks for what was, at that time, the largest gift in our history.

No tale is complete without a mystery, and this story is no exception. Secreted behind a wall in the lower foyer of the Sobey School of Business is a 50-year time capsule that includes a copy of the Honorary Doctor of Commerce degree conferred upon David in 1991. The contents of the capsule may be hidden until 2047, but the rationale for including David’s degree is evident. He and his wife, Faye, have been loyal supporters of Saint Mary’s for more than three decades, beginning in 1986 with his service on the Board of Governors. From 1991 to 1998, he chaired the Building on Strength Capital Campaign, helping to raise $24 million. When the Sobey School of Business Advisory Committee met for the first time in 2002, David was a member. From 2008 to 2010, as Saint Mary’s first lay chancellor, he was the face of Saint Mary’s for thousands of students crossing the stage at convocation.

Following his father’s example, Paul Sobey took the University forward in 2004 as chair for Hearts and Minds, the largest capital campaign in Saint Mary’s history. The $45 million raised touched every inch of campus. As well as contributing to the Atrium and Global Learning Commons, it allowed us to embark on a $25.5 million renewal of the Science Building.

From chairing a capital campaign and service on Saint Mary’s University’s Board of Governors, to acting as chancellor from 2015 to 2018, Paul has played a critical role in making Saint Mary’s a special place to work and learn. It is our good fortune that in 1981 he left his job as a chartered accountant in Toronto to return to Nova Scotia for business studies at Saint Mary’s and a position with Empire Company Limited.

In a Chronicle Herald notice congratulating Paul on his leadership for Hearts & Minds, there is a photo of him in the recently completed Atrium with Andrew Morash BComm ’13, a 2009 recipient of the Sobeys Scholar Award. Thanks to a summer internship that accompanied the award, when Andrew graduated summa cum laude with a major in Accounting, he already had a full-time position secured with Sobeys Inc. Since then, he has certified as a chartered accountant and worked his way up to a position as Lead Finance, Operations for Sobeys’ West Business Unit in Calgary, Alberta. For the Sobey family, this is yet another example of the impact of their engagement.

In addition to being a remarkable friend and a great inspiration to Saint Mary’s, Paul is a walking master class for aspiring students. Not only have he and his wife Marsha made Saint Mary’s a personal charitable priority, but he also gives generously of his time, sharing the wisdom of a 32-year career that culminated in his role as President and Chief Executive Officer of Empire Company Limited. In 2007, the year that Sobeys marked its 100th anniversary, he received two special tributes from Saint Mary’s: an associate alumni membership in recognition of his significant service to the university and induction, along with his father, into Saint Mary’s Turning Points Hall of Leadership.

Paul also received an Honorary Doctor of Commerce degree during Saint Mary’s spring convocation in 2011. Speaking on that occasion, he advised graduates to let personal values guide their career paths, an ethos espoused by both Paul and his wife, Marsha. A proud alumna (BEd’82), teacher, national athlete, and philanthropist, Marsha rivals Paul when it comes to “being true to her school”. Her service includes membership on the university’s Board of Governors and acting as co-chair of Turning Points in Leadership. In 2016, she received the Saint Mary’s University Alumni Association’s Distinguished Community Service Award.

Thanks to David’s gift to the Hearts & Minds capital campaign, the Sobey School of Business is now home to the David Sobey Centre for Innovation in Retailing and Services, which has already enriched the student experience by running the annual David Sobey Retail Case Competition. The
only centre of its kind at a Canadian
university, the David Sobey Centre hosted the inaugural National Retail Innovation Awards in 2017, an event that featured Dr. Sobey as guest speaker.

A guest book for the official opening of the David Sobey Centre for Innovation in Retailing and Services is a veritable who’s who of the business community – with names such as Bonnie Brooks, Julie Toskan, Fred Smithers, Karen Oldfield, Joe Metlege, and Allan Shaw. It’s also a listing of more than a dozen members of the Sobey family, many of whom are proud Saint Mary’s University alumni and generous supporters.

Of special note to Sobey family members, the guest book is also a record of heartfelt comments from some very grateful students.

“You have made such an impact on my life,” wrote Alison Church, a 2017 Bachelor of Commerce graduate who now lives in Dublin, Ireland, where she is working with Grant Thornton in business risk advisory and has started her Chartered Accountancy designation. Thanks to Sobeys, she managed to graduate without any debt and was even able to save for her time in Ireland. “My employers were very impressed that I had received a Sobey award,” says Alison, “so Sobeys and the Sobey family have also helped me get a great job!”

One of the most moving entries in the guest book came from a family member: “Congratulations Granddad! Such a fantastic evening in honour of a wonderful person with a huge heart. All my love, Joanne.”  This proud granddaughter and her three sisters all graduated from Saint Mary’s University. As the parents of these four Saint Mary’s alumni, Janis Sobey-Hames and Christopher Hames have a special connection to the University and are generous philanthropic supporters of the Sobey School.

Saint Mary’s is happy to stand among these very worthy causes and to celebrate its strong connection with a family steeped in social responsibility and philanthropy. In the words of Michael Medline, President and Chief Executive Officer of Sobeys Inc., “Frank Sobey embodied the values of giving back and building opportunities for others – values that still resonate through Sobeys in its 110th year in business.”

Thanks to Frank’s example and his family’s generosity, hundreds of Sobey School of Business graduates are now out in the world creating their own impact and finding unique ways to give back. It’s a true legacy of giving, and the University is deeply grateful.″