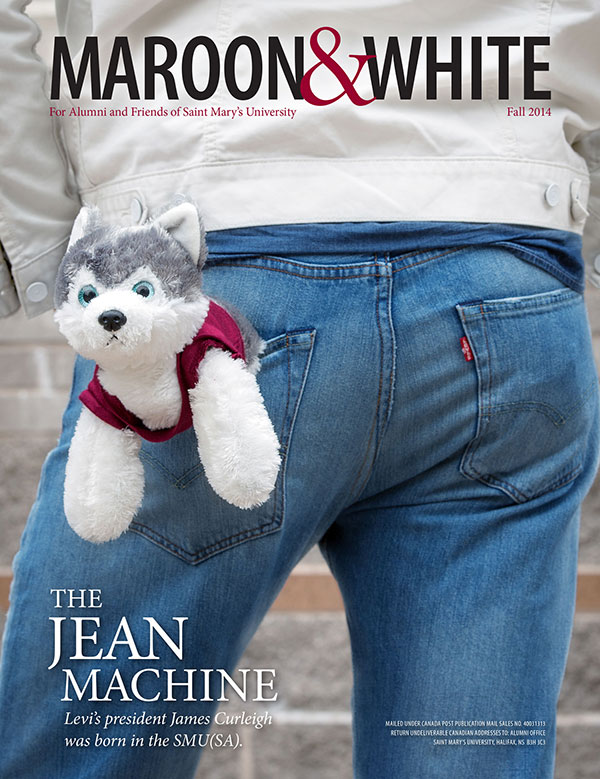 Maroon & White is published for alumni and friends of Saint Mary’s University. Circulation: 29,000

“When we were at school, we still had this notion that information was power,” says James Curleigh BComm’89. “He or she who had access to it had the advantage. Well today, information is ubiquitous, everyone has access to it. What I would say the biggest shift is not how to get the information, but how to synthesize the information to make sense of it.”

Making it work in the Maritimes is a recurring theme for Kyler Crawford. He’s been around. Originally from Moncton, he completed two undergraduate degrees at St. Francis Xavier before a spell playing professional football in Germany. But it was a five-year stint at a large professional services firm in Ottawa that led to some serious thinking about reshaping his career.  >
(cont. from…

Something to Talk About

There was a time when Matthew Fanning dreaded public speaking.

“It’s not unusual,” says Fanning, a Finance major who graduated from Saint Mary’s University in 2008 with a Bachelor of Commerce degree. “Most people would rather encounter a grizzly bear than stand on stage to deliver a speech.”

What is unusual is that after working for a few years, first as…

Once Upon A Mattress

There’s a fairytale quality to Chen Qing’s success selling mattresses—but there’s nothing long ago and far away about the way the young Business Management major parlayed two free movie tickets into a Halifax-based business worth more than $200,000.

The story begins only five years ago when a 19-year-old from China arrived in Halifax to attend the Sobey School of Business.

Matching funding from the Nova Scotia Research and Innovation Trust (NSRIT) added to financial support already received from the Canada Foundation for Innovation (CFI) for almost half a million dollars for research being conducted by two Saint Mary’s professors, Dr. Aldona Wiacek and Dr. Jacob Hanley. For Environmental Science professor Wiacek, this makes it possible to purchase a ground-based,…

Six of the high-performing, emerging leaders chosen by 21inc for the prestigious 21Leaders program have close connections to Saint Mary’s. Prevailing against 628 candidates in the Maritime provinces to take 6 of the 54 coveted spots in a 10-month mentorship program are:

Plans for a ground-breaking, dual degree program came to life on July 7 with the arrival of a visiting delegation from China’s Beijing Normal University, Zhuhai (BNUZ). A long-standing relationship between Saint Mary’s and BNUZ, and more than a decade of collaboration, have paved the way for the Sobey School of Business and BNUZ to jointly offer a Bachelor of Commerce degree program in Zhuhai.…

A New Way to Say Welcome

For new and returning students, the university’s redesigned Welcome Week offered a variety of fun-filled activities that reflect Saint Mary’s values and culture. Galvanized by the events of last fall, Saint Mary’s has made a commitment to prevent sexual violence and promote a safe, inclusive, and respectful learning and working environment. To this end, the university is developing on-line…

Letter from the Alumni President

I am honoured to be taking on the role of President of Saint Mary’s Alumni Association. It gives me great pleasure to represent roughly 42,000 alumni from more than 100 countries all over the world.

Dr. Dodds will serve as international chair, with Saint Mary’s honourary degree recipient Wadih Fares DComm’09 as national chair. “We need to be strategic in our attraction efforts because Nova Scotia…

What Dreams May Come

“If you can dream it, you can do it,” says the Vice-Chairman and self-described Chief Adventurer of the Hudson’s Bay Company.

During the spring of 2014, Brooks had two opportunities to offer that personal wisdom to the Saint Mary’s University community: during her induction into the University’s Turning Points Hall of Leadership, and…

“The Thomas J. and Donald P. Keleher Memorial Scholarship helped me purchase books and pay for tuition. It also allowed me to devote more time to my studies and excel in my classes. My family and I are so thankful for this award and very grateful to the Keleher family for their generosity.”

Donnie Keleher DipEng’69, BSc’70 loved Saint Mary’s, so when the university’s former Director of Development passed away in May 2014, his family asked Saint Mary’s to add his name to the endowed scholarship fund already established by Donnie’s late father, Thomas J. Keleher (1918 to 1992).

Celebrating a life lived out loud

Dr. Kevin Bonnycastle was all about possibilities, so it seemed a fitting memorial when colleagues in Saint Mary’s Sociology and Criminology department decided to mark her untimely passing with a student award. For Saint Mary’s alumnus Lawrence Buhagiar, making annual gifts to support this award was a dual opportunity to honour a very good friend and at the same time make a lasting difference…

The Saint Mary’s University community was pleased to see Carol Dodds MEd’90, MA’95 honoured as Outstanding Volunteer Fundraiser of the Year at the 2014 Maritime Philanthropy Awards Dinner in May. In addition to her many other volunteer and fundraising interests, Mrs. Dodds is the driving force behind Time for Tea, an annual English tea

party that began 14 years ago and has since…

Saint Mary’s alumnus Kevin Downie, a part-time faculty member at Sobey School of Business, and a lawyer with MacInnes Downie Wade, is the university’s interim Athletics and Recreation Director. As a student at Saint Mary’s, Downie was a letter athlete, an MVP in varsity soccer, and a keen competitor in hockey, lacrosse, football, track and field, and baseball. After completing an Honours BA…