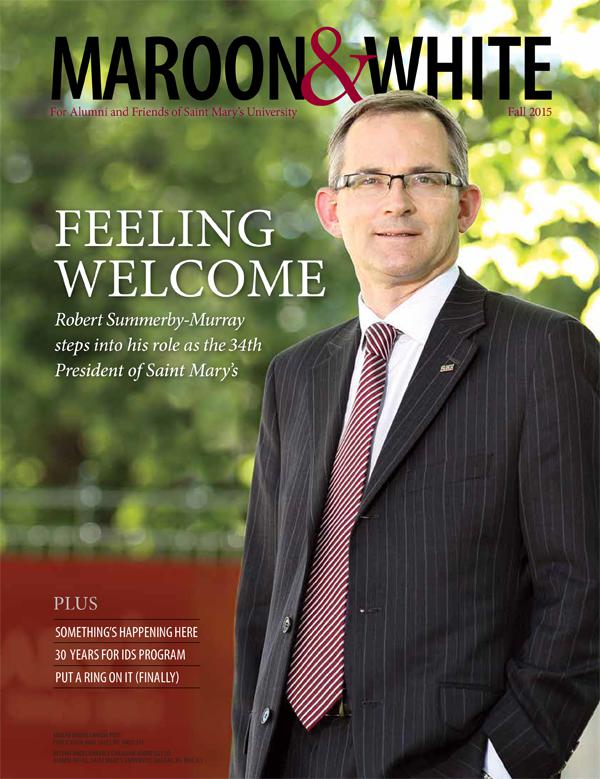 Robert Summerby-Murray doesn’t skip a beat when asked to describe a daily incident that encapsulates the special qualities of Saint Mary’s University.

“I have these moments every day,” says Saint Mary’s 34th President. “Recently, I stopped to chat with two young women who were walking across campus. One had a babe in her arms and was very excited to be here from Antigua to…

The year was 1985. A group of committed social scientists, tired of the antiquated disciplinary approach to global problems, decided to try something different. They had an inkling that issues like poverty, environmental change, and gender inequality could be better addressed through an inter-disciplinary program and set out to form one at Saint Mary’s University. It was the first International…

Driving change and giving back

For as long as he can remember, Jeff MacLean dreamed of being both an engineer and a leader. “My experience of good leaders was that they made such a positive impact—for families and communities, and also for employees, wherever they worked,” says the Saint Mary’s alumnus. “I wanted to do that.”

The President of Michelin North America (Canada) Inc. was raised in Port Hawkesbury,…

Strength on the stick

It may not be the hockey championship JP MacCallum dreamed of winning as a kid on Prince Edward Island, but it’s still awfully sweet.

MacCallum BSc’99 led the Tohoku Free Blades to the Asia League title this past season—the team’s second championship in his three-year tenure as Head Coach. The Free Blades play in the city of Hachinohe, at the northern tip of Honshu, Japan’s main…

When Jamie Hartling was 12 years old, he received a Christmas present that would change the course of his life. It was a leather-working kit. By the summer, he was selling at craft shows. By junior high, he had become the go-to guy for teachers and other adults who needed briefcases and purses. And by high school, he had scored a contract for a booth at the Halifax International Airport, selling…

Christopher Webb has been an artist his whole life. He began painting before he could even talk.

It was his Italian grandmother, Maddelena (Pavia) Asprey, herself an amateur artist, who inspired this passion. In fact, she was so important to Webb that he named his seven-year-old daughter, Maddelena, after her. In addition, he and his partner, Victoria Fougler, also titled their innovative…

Summer is now but a fleeting memory. The 39th annual Saint Mary’s University Alumni Golf Tournament at Granite Springs, held on August 20, was a great success. It raised sufficient money to fund 20 student bursaries. Mark August 18, 2016 for our 40th tournament and join us for a wonderful day. Also in August, thanks to assistance of the Alumni Office, the Financial Aid Office and faculty/staff…

The Language of Discovery

At first glance, it appears that Amberlin Hines is assessing the fare at a seafood buffet. On closer inspection, there’s more to Hines—and to the mussel she’s holding—than meets the eye.

“Amberlin is a student from Gallaudet University in Washington, DC, a liberal arts university for the deaf,” says Dr. Linda Campbell, an environmental scientist at Saint Mary’s University.…

Celebrating Citizens of the World

An August reception at Saint Mary’s concluded a four-week study program for students from Beijing Normal University (BNU) in China. The 27 Chinese students, nine from BNU’s Beijing campus and 18 from the Zhuhai campus, were participants in the Cross-Cultural Communications: North American Studies program jointly hosted by Saint Mary’s and Acadia University. “I applaud you for also taking…

The Nova Scotia business and research communities came together at the Sobey School of Business to recognize the accomplishments of Nova Scotian employers in promoting and maintaining supportive and healthy workplaces. Held in August during the annual Occupational Health Psychology Summer Institute hosted by Saint Mary’s CN Centre for Occupational Health and Safety, the Fifth Nova Scotia Psychologically…

Team SMU Science battled rain—and nerves—to successfully rappel down Halifax’s 13-storey Westin Hotel on June 13 in support of Rope for Hope, an annual fundraiser for Make-a-Wish Atlantic Provinces. In stepping up to step over the edge of a roof, Science team members raised over $4,000 through a combination of pre-event fundraisers and generous donations from students, staff, and alumni. One…

A Stirring Finale for Time for Tea

On Sunday, June 21, Saint Mary’s light-filled Atrium made a pleasant venue for the University’s final Time for Tea, a sumptuous English tea party in support of bursaries for single parents who attend Saint Mary’s University. The Duchess of Bedford may have introduced afternoon tea in the 19th century, but Saint Mary’s has perfected it over the past 15 years. With Carol Dodds’ MA’95,…

Evidence-based, responsive, patient-centred, and timely: these are just a few of the words used to describe the Maritime Strategy for Patient-Oriented Research SUPPORT
Unit (MSSU), based at Saint Mary’s. It’s an initiative expected to improve patient care by making it easier for researchers across the country to work together and share data. “It’s a huge opportunity to have a unit…

Notes from the Underground

Lt. Sarah Gray works hard to balance her academic responsibilities as a criminology major with her training obligations as a reservist in the Canadian Forces, but the 4th year student is quick to admit that she couldn’t do it without the support she receives from Saint Mary’s. Thanks to a nomination from
Lt. Gray, the Faculty of Arts received a Canadian Forces Liaison Council Provincial…

Paying it Forward Pays Off

Well-known regionally for enabling social, environmental and economic progress through entrepreneurial action, the Saint Mary’s Enactus team emerged from the Enactus National Competition in Toronto in May 2015 ranked second in the entire country. Saint Mary’s also took the national title in the BDC Entrepreneurs First Project Partnership Best Project for The Startup 100, a community development…