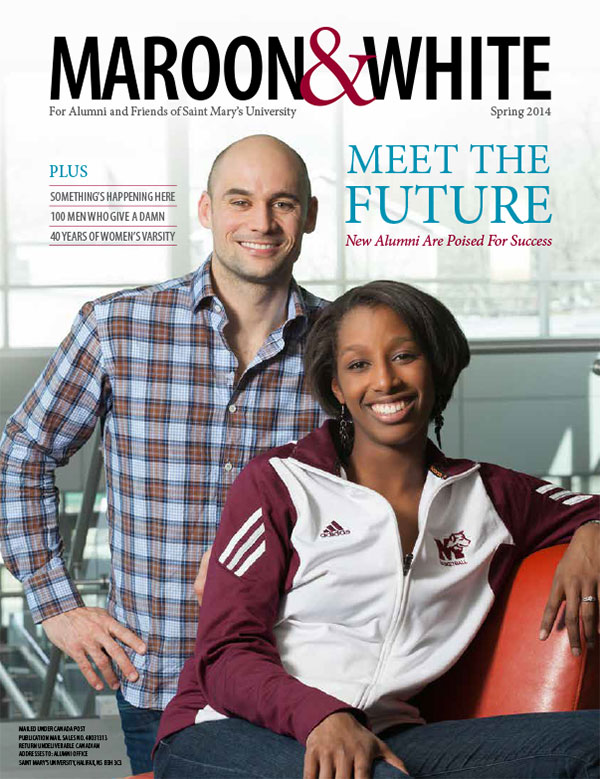 Welcome to our newly designed issue of Maroon & White. We hope you enjoy the fresh new look and user-friendly online format. You can browse all content from this issue below.

Alumni Representatives on the Board of Governors

The open staircase in the Homburg Centre for Health & Wellness is more than an airy backdrop for photos of Justine Colley and Andrew Russell. Forward-looking, impressive and strong, it’s a fitting symbol for two of Saint Mary’s most recent graduates.

Colley takes her place on the bottom step, smiling for the camera as she recollects memorable moments…

Saint Mary’s University is far more than a school for fifth year Bachelor of Science student, Sylvia Abdelgawad. “For the past five years, Saint Mary’s has been the family that pushed me to grow and helped me to exceed my own limits,” says Abdelgawad, who graduates in May with an Honours degree in Biology and Psychology. “It will be very difficult to leave here after…

Melissa Dubé is about to graduate with a degree that didn’t exist when she entered Saint Mary’s in 2010.

“I had already finished my first year when Saint Mary’s introduced the School of the Environment and the Bachelor of Environmental Studies,” says Dubé. “Fortunately, the timing still worked, and I was able to make the switch and complete…

Steve Armitage credits the typing class he took in Grade 10 with his 49-year career at CBC. “I liked the odds at the time. Thirty-six girls and two guys,” he says, laughing. In addition to being a great way to get a date, typing class led directly to his role as one of Canada’s most prominent sports broadcasters.

“They needed someone who was…

When someone asks Alex Handyside MBA’00 what he does for fun, his answer is immediate and genuine. “I volunteer,” he says. And it’s true. He is a born volunteer, giving his time “everywhere and anywhere.” He is particularly fond of non-profits, having worked for a number of them in the Halifax area. As the Director of Development and Communications at the Metro Food…

The Vorstermans family’s connection with Saint Mary’s began in 1956, when Joseph Vorstermans,…

Dr. Trudy Sable had just begun a six-day stay to work with the Innu community of Sheshatshiu when the call came to meet with Grand Chief Prote Poker for the official signing of a ground-breaking Memorandum of Understanding with Saint Mary’s University. A 40-minute drive on winding, icy roads took Dr. Sable to Goose Bay, Labrador and the fruition of 15 years’ work collaborating with the Innu…

Letter From the Alumni President

Welcome to our newly designed issue of the Maroon & White. We hope you enjoy the fresh new look.

The spring issue is published when our graduating students are about to cross the stage to become our newest alumni. It seemed fitting to highlight a few of our outstanding students-it was a tough choice but we think you’ll…

Dr. Brosseau earned top honours at the Discovery Centre’s 11th Annual Discovery Awards for Science and Technology as the 2013 Emerging Professional. An honour reserved for outstanding individuals under the age of 35, this recognizes Dr. Brosseau’s research as part of a global effort to develop portable…

Putting Mercury on the Map

Working as part of a university-government partnership, with funds from Environment Canada and the National Science and Engineering Research Council of Canada, Saint Mary’s Environmental Scientist Dr. Linda Campbell collaborated to produce the first map of mercury concentrations in fish across Canada. The value of a national map, according to Dr. Campbell, is that it demonstrates the variations…

Saint Mary’s University’s Enactus team shone at the Enactus Regional Competition in Halifax this spring, taking first place in both the Capital One Financial Education Challenge and the TD Entrepreneurship Challenge. The Regionals were equally stellar for Sobey School of Business marketing student Victoria Blue, who won the HSBC Woman Leader of Tomorrow Award for all of Atlantic Canada.

Bryan McLaughlin’s extracurricular activities include keeping a sharp watch on the market. “Not the stock market,” says the 23-year-old Sobey School of Business student, laughing, “the Halifax Seaport Farmers’ Market.”

As the Director of Organizational Development for Saint Mary’s ENACTUS team, McLaughlin helped a local, small business increase sales and move from a cramped…

From Track Suit to Tux

Former Olympian Andrew Russell traded his track suit for a tuxedo to receive a prestigious Futures Fund Scholarship for Outstanding Leadership during a gala held at Toronto’s Ritz-Carlton Hotel.

“I am very thankful to have received this honour,” says Russell, a second-year Sobey School of Business MBA student who competed as a sprint canoeist in the 2008 Summer Olympics in Beijing.…

Words from a Pulitzer Prize Winner

Tribute and tradition shared centre stage with author Richard Ford on the evening of Friday, February 28th when the Pulitzer Prize winner delivered this year’s Cyril Byrne Lecture at Saint Mary’s University. One of the major cultural events in Halifax, the annual Cyril Byrne Lecture celebrates the life of a teacher, researcher, actor, and raconteur who passed away in 2006. During his 35-year…

On the Top and On the Move

Saint Mary’s basketball teams made headlines this season, with the Men’s Basketball Huskies emerging as the 2014 Subway AUS champions, and the Women’s Basketball Huskies ending a 31-game winning streak with a single season loss to take home a CIS silver. During that season finale, Justine Colley, twice the most valuable player in Canadian university sport women’s basketball, ended her incredible…

There’s something for everyone in SMUapp, a free mobile app available for iOS and Android devices at smuport.smu.ca/smuapp. In addition to providing a secure way to access everything from grades, schedules and account information to campus news and events, SMUapp also offers…

Where in the World is Saint Mary’s?

With more than 42,000 alumni in 140 countries, and a growing complement of international exchange programs, Saint Mary’s University has a rich tradition of cultivating connections around the globe. The exciting news is that we’re about to ramp it up a notch with a custom-built crowdsourcing initiative called #SMUselfie. Using the latest social…

“When I look out my window, the first thing I see is a statue of William Lyon Mackenzie King,” says Senator Moore. “Then, looking behind him, I can see the larger-than-life…