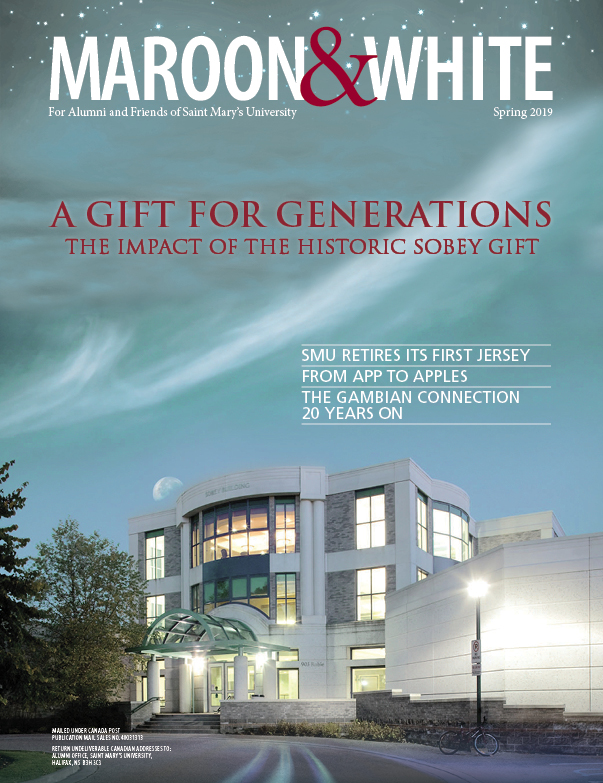 “They became a cadre of people who were full of confidence”

In 1995, a small group of people had a big idea: a university extension program that would grant degrees in the tiny West African country of The Gambia. About twice the size of greater Halifax, and almost entirely surrounded by Senegal except for a small strip of Atlantic coastline, the Republic of The Gambia had no university of its own. What it did have was a hunger for education and a need to…

Elevating the Sobey School of Business Through Transformational Philanthropy

On March 21, more than 500 people in the McNally Auditorium burst into applause when they heard David Sobey announce the largest philanthropic gift ever made to Saint Mary’s University. There were audible gasps and a full standing ovation when he confirmed the amount of the gift: 18 million dollars. It was truly a day for the history books.

Since the announcement, campus has been buzzing…

The Sobey family connection and generosity to Saint Mary’s University began in 1975 with Frank H. Sobey, the entrepreneurial visionary who built a grocery empire from a meat delivery service established…

Seven years ago, it looked like Kyle Awalt was just hitting his stride as a software developer. He’d graduated from Acadia University in 2008 with a degree in Computer Science, and now he was back on the East Coast after a stint with BlackBerry during its peak years.

But something was missing. Even at a new software job at NTT Data in Halifax, things weren’t feeling as rewarding…

Dedication And Hard Work Are Always In Fashion

Growing up on a farm in Bras d’Or, Cape Breton, Carolyn Quinn learned about working hard at a young age—it’s a value that has served the 39-year-old executive director of Toronto Fashion Week well throughout her career.

At a talk she gave at a Toronto high school recently, Quinn offered her teenage audience her best advice: whatever path their lives take, and no matter the job, a…

It’s January 2016 and Josh Domingues is up to his chin in paperwork at his wealth management company in downtown Toronto. His phone starts ringing and he picks it up to hear his sister Paula, a chef who freelances for catering companies, choking up with tears. “What’s wrong?” he asks. She explains how upset she is that her boss demanded she throw away $4,000 worth of uneaten clams after…

For the first time in the 217-year history of Saint Mary’s University, a jersey will be retired to honour Saint Mary’s Huskies and Canadian university football legend, Chris Flynn BA’97.

“To be the first player to have their jersey retired by Saint Mary’s University, the place where I have made so many memories, is truly an honour,” said Flynn. “I am incredibly proud of what…

House calls for haircuts proved to be a cut above the competition and too good an investment to pass up for Saint Mary’s University’s Venture Grade Fund. The fund invested $15,000 in Cribcut, an online booking service that connects consumers with top hair stylists that bring the salon to them. The fund is a student-raised and run venture capital fund, and the first of its kind in Canada. Should…

Hundreds of people attended the documentary screening of Nakatuenita: Respect which was co-produced by Richard Nuna, Innu Nation, and Dr. Trudy Sable, Community Conservation Research Network (Saint Mary's University) and directed by filmmaker Kent Martin.  The documentary tells the story of Ntesinan, a once peaceful territory where Innu families lived in tents, hunted for survival, and learned…

Resolving conflict can be tricky enough for adults, but a new series of books published by Saint Mary’s University aims to help children better understand and resolve conflicts respectfully and peacefully. Peaceful Schools International launched the trio of books in the fall semester, in conjunction with the university and the Saint Mary’s University Students’ Association (SMUSA). All three…

Three Saint Mary’s University faculty members provided their expertise at the G7 Oceans Summit at the Halifax Convention Centre this academic year. The event was held in conjunction with the G7 Joint Ministerial Session on Healthy Oceans, Seas and Resilient Communities. The summit, and the G7 meeting, generally focused on oceans, while the themes of the gathering were plastic reduction, sustainable…

December 2018 saw the creation of the President’s Advisory Council on Indigenous Affairs.  Members include:

On February 14, 2019, Saint Mary’s University and the RBC Future Launch Program announced the establishment of the RBC Talent Hub at the Saint Mary’s University Entrepreneurship Centre. Supported by a gift of $695,000 from the RBC Foundation, the program will create new co-operative education positions and expand entrepreneurial coaching, skill building, and mentoring for students, including…

On November 8, Saint Mary’s announced the Viola Desmond Bursary. Established by The Honourable Wilfred P. Moore Q.C., BComm’64 LLD’07 and Ms. Jane Adams Ritcey with the permission of the Desmond Family, the bursary will be given out every year to full-time African-Nova Scotian students at Saint Mary’s, with a preference for female candidates. “Viola Desmond has been very good to our city,…

Nearly 500 delighted fans came to see CODCO at the 2019 Cyril J. Byrne Memorial Lecture. The legendary Newfoundland group hadn’t performed together since their ground-breaking TV show went off the air 26 years ago, but Andy Jones BA’69, Cathy Jones, Greg Malone and Mary Walsh kept the audience in stitches at the March 15 event. “The academics at Saint Mary’s who study television really treated…

This year, a group of Political Science students at Yale University tagged along electronically with Saint Mary’s students participating in the Northern Ireland Conflict Resolution Program trip to Belfast. “Our colleagues at Yale recognize Saint Mary’s as a leader in this type of experiential programming,” says Bridget Brownlow MA’12, SMU’s Conflict Resolution Advisor and President of…

Saint Mary’s and The David Sobey Centre for Innovation in Retailing and Services are participating in Retail Revival Halifax, an initiative from eBay Canada and the Halifax Regional Municipality. The free 12-month training program will help 70 local small and mid-sized retailers leverage eBay's global marketplace. Dr. Ramesh Venkat, Director of the David Sobey Centre, along with Dr. Rahman Khokhar…

Students preparing for a field school trip to The Gambia this past November discovered that 10 Canadian WWII airmen were buried in the Fajara War Cemetery. “It’s a piece of our history that had possibly been lost or at least not very well known until now,” said Dr. Cathy Conrad, a professor in Geography and Environmental Studies. The students laid wreaths on the graves during a Remembrance…

The Sobey School of Business was ranked eighth in the world for sustainability in the Corporate Knights Better World MBA ranking, released in November 2018.  The school attributes its success to the way sustainable development and ethics are deeply embedded in its courses, the strong ethnic and gender diversity of its students and faculty, and the faculty’s extensive research on sustainability…

A team of 20 Saint Mary’s students led by Dr. Marc Doucet, Chair of Political Science, shone at the National Model UN conference in New York this past March. They won a Distinguished Delegation Award for their work representing Kuwait, and students Yankun Li and Hannah Shuttleworth won an Outstanding Position Paper award for their pre-conference preparations for the Conference of the Parties to…

Dr. Kevin Vessey’s research into how poor-quality, marginal land can be used to produce biomass as a potential revenue stream for farmers received $1.2 million in federal and provincial funding. The Saint Mary’s Biology professor is leading a five-year project to determine what substances and organisms best promote plant growth and decrease production costs in a variety of plants. “The long-term…

As we reflect on the past year, I am reminded of something I once heard: “The start of anything new brings the promise of something great”. This is exactly where we are now, in the midst of an exciting time at the University. Our researchers are advancing knowledge in areas as diverse as artificial intelligence, coastal zone management, and international migration; our students are leading initiatives…

When you receive this issue of the magazine, Saint Mary’s will have welcomed another 1000 graduates into the Saint Mary’s alumni family. As your president, I have the honour of presenting pins and shaking the hands of our newest grads as they walk across the stage of the McNally Theatre Auditorium at convocation. In addition, many of our alumni volunteer to walk in the Honour Guard, donning…