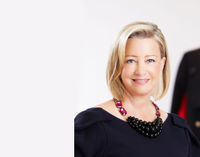 What Dreams May Come

“If you can dream it, you can do it,” says the Vice-Chairman and self-described Chief Adventurer of the Hudson’s Bay Company.

During the spring of 2014, Brooks had two opportunities to offer that personal wisdom to the Saint Mary’s University community: during her induction into the University’s Turning Points Hall of Leadership, and next, during Convocation ceremonies, when she received a Doctor of Civil Law, Honoris Causa.

“Entering the Turning Points Hall holds a special meaning for me,” said Brooks, speaking in the Loyola Conference Room on April 23 during the annual Turning Points dinner. “Saint Mary’s is a special university and I am honoured to join a Hall of Leadership that includes both David Grace and Paul Sobey. Since joining the Board of Directors for Empire Company Limited, I have come to know and greatly respect the Sobeys, and it’s a true honour to look into the audience and see members of the family. I am also thrilled to be here on the night when Marc Poulin, Empire’s new CEO, is speaking to all of us.”

As a driving force behind the world’s oldest continuously operating company, and a visionary who has built and repositioned fashion and luxury retail businesses around the world, Brooks had a unique perspective to share, both at Turning Points  and in the address she delivered at Convocation.

“Retailing in Canada is extremely challenging and exciting right now,” says Brooks, “and it’s a great privilege to work with two of the finest companies in our country. Businesses with legacies like Sobeys and Hudson’s Bay Company are unique today—not only in Canada, but also globally. They have survived takeovers and retail wars and triumphed, not only because of their vision and strategic competencies, but also because they are companies with high integrity and authenticity.”

On receiving her honourary degree in May, Brooks again emphasized the importance of ethical approaches to business, urging other “adventurers” gathered in the Halifax Metro Centre to take pride in their work and to practice integrity every day, in every deal they make, and with everyone they meet.

Quoting Canadian author Robin Sharma, a leadership expert whose book The Leader Who Had No Title inspired a culture shift at Hudson’s Bay, Brooks said: “Anyone in any job at any level in a company has the choice of interacting with others in a way that makes the experience a positive one or a negative one. When the experience is positive, it can be magic.”

For Brooks, there’s also magic in some of the places she has worked, including the United Kingdom, France, and Hong Kong. “Living and working in a foreign country was hard at first,” she admits, adding, “but it gave me a first-hand appreciation for other cultures—and in the course of my career—that has proved invaluable.”