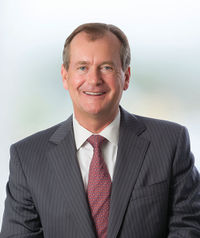 Dr. Paul D. Sobey is following in the footsteps of his father, Dr. David F. Sobey, who served as Saint Mary’s Chancellor from 2008 until 2010. Born in Halifax, but raised in New Glasgow, Dr. Paul D. Sobey, FCA, B.Comm, D.Comm, worked through various positions in Empire and its subsidiaries, assuming the role of Vice-President and Secretary in 1985, and President and CEO of Sobey Leased Properties Limited in 1986. In 1988, he took over as Chairman of Lawton’s Drug Stores Limited, and in 1989 as President and CEO of Atlantic Shopping Centres Limited. After completing an Advanced Management Program at the Harvard University Business School in 1996, he became President and CEO of Empire Company Limited in 1998.