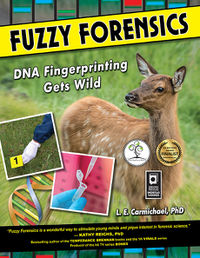 Dr. Lindsay Carmichael was too excited to write even 140 characters after an awards dinner in the fall of 2015 to announce the winners of last year’s Lane Anderson Award. Her author friends, on the other hand, lost no time tweeting that Carmichael’s book Fuzzy Forensics: DNA Fingerprinting Gets Wild had been named the best science book in Canada in the young readers’ category.

In addition to receiving one of the nation’s most prestigious book awards, and $10,000 in prize money, Carmichael, a Senior Tutor at Saint Mary’s University’s Writing Centre, benefits from the knowledge that her win will draw attention to the dedicated men and women who use forensic science to investigate wildlife crime and protect wild species in Canada and around the world. “They deserve to have their contributions recognized,” says Carmichael, who has a PhD in wildlife population genetics and writes under the name L.E. Carmichael.