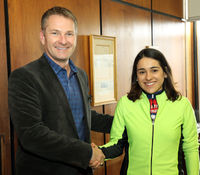 Sobey School of Business student Ana Paula Mercado Farell was thrilled to be part of the winning team for the first Retail Concept Competition, organized in March by the David Sobey Centre for Innovation in Retailing and Services. She was doubly pleased to receive an innovation award, courtesy of retail futurist Doug Stephens, a member of the advisory board for the David Sobey Centre.

In Sobey School MBA news, a team defeated contenders from 10 other top MBA programs to take first place in February’s East Meets West Leadership Case Competition at the Ivey Business School. Meanwhile, another team of MBA students prevailed against challengers from the world’s most prestigious business schools to emerge as one of the top three finalists in the first round of the Ben Graham Centre’s International Stock Picking Competition.