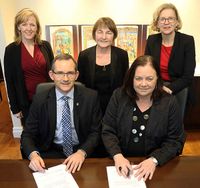 The Return of a Treasure

Remnants of an old gateway were all that remained of the Belgian Abbey of Salzinnes until 1998, when alumna Judy Dietz (BA’84, MA’06) discovered a 450-year old illuminated manuscript in Saint Mary’s University’s Rare Books collection. A hand-scribed choir book containing 240 parchment folios with music and text, the Salzinnes Antiphonal was likely brought to Nova Scotia in the mid-1800’s by Bishop William Walsh, the first Archbishop for the Archdiocese of Halifax. Bishop James M. Hayes gave it to Saint Mary’s in 1975 to mark the opening of the Patrick Power Library. After several years of scientific analysis and conservation at the Canadian Conservation institute in Ottawa, the antiphonal has returned to Saint Mary’s and will be featured at Centuries of Silence: The Discovery of the Salzinnes Antiphonal, an exhibition that opens in May at the Art Gallery of Nova Scotia.