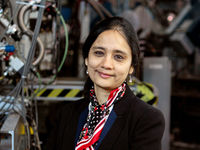 Saint Mary’s University physicist Dr. Rituparna Kanungo has been named as a Fellow of the American Physical Society (APS) for her outstanding research on rare isotopes. This honour goes to scientists who have made significant innovative contributions to the field of physics. No more than one half of one percent of the Society’s membership who have been nominated by their peers are elected as Fellows. Dr. Kanungo’s nomination was for research which encompasses several projects in Canada and abroad. She has a large network of national and international collaborators, bringing together undergraduate and graduate students, post-docs and collaborating scientists from around the world.