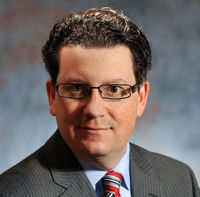 A Measured And Disciplined Voice Stands Out

“Learning has always been important to me,” says Eric Miller. Both his parents went to Saint Mary’s, so when a high school visit to the political science department grew into a BA in Political Science with first class honours, it wasn’t exactly a surprise. “I identified with the world views of people like Dr. Ron Landes and Dr. Don Naulls,” he explains, remembering two favourite professors. “I wanted to understand how the world around me was run, and I knew that Saint Mary’s could deliver that.”

Today, Miller is president and founder of Washington, DC-based Rideau Potomac Strategy Group, which offers policy advocacy, research, strategy development, and geopolitical advisory services. Rooted in the United States and Canada, the Group offers solutions to governments and organizations seeking to expand their influence and advance their agendas in Washington, Ottawa, and beyond. Areas of expertise include cyber-security, trade disputes, legislative and regulatory challenges, enterprise risk, and how the political situation in any given country can affect all of these things.

In other words, Miller explains complex problems for a living, and helps people understand the interconnectedness of social, political, and economic drivers. “Where I’ve tried to focus is the added value. Where you will ultimately make it or not is your ability to draw connections between seemingly disparate things,” he says. “I thread the needle between public and private, law and regulatory, and open pathways for people who need pathways. A lot of what I do is peer advisory, for example, explaining and demystifying Donald Trump’s Washington to Canadians.”

One particularly fascinating hat Eric Miller wears is as a member of the advisory committee of the chief negotiating officer for NAFTA, a role he takes on pro-bono. “It’s my public good project,” he says. In January, he published an op-ed in the Globe and Mail called “Canada can win at trade – even if NAFTA dies.” It’s a pragmatic but ultimately optimistic view of Canada’s future as a trading partner with the US and other countries. He believes we’re in for a long negotiating process.

“We’re heading for a ‘break’ while certain political processes take place,” Miller explains, such as the presidential election in Mexico and the US renewal of its trade promotion authority. “This could be positive because it gives us more time. Eighty per cent of the work of trade negotiations happens at home: interagency processes, meeting with the business community, organizations, and stakeholders. You need time to sell what you’re proposing, and time to do your homework to be effective at the table. This takes time, and it takes time for a reason. It’s complicated.”

Speaking of time, Eric Miller didn’t just wake up one morning knowing all this stuff. Two weeks after graduating from Carleton, he took a job at the Inter American Development Bank, which gives loans to countries in Latin America and the Caribbean.

“Right around the time the world economy was starting to melt down, I took a job at the Canadian Embassy in Washington to handle issues on borders and other things of that nature. Because of the crisis, I was promptly redeployed as the point person at the Embassy on the auto bailout.” Industry Canada then created a job for Miller as their representative in Washington. He was their very first representative abroad, responsible for a range of sectors and industries important to Canadians. He went on to work with the Business Council of Canada and Canadian Chamber of Commerce.

In 2016, Miller founded Rideau-Potomac Strategy Group, partly to bring all his skills and experience together for the benefit of his clients, and also to reunite with his American wife, Arica Young, and their daughter, Chloethiel Miller, in Washington.

The quest to understand how the world works continues to shape Miller’s career. Cybersecurity is just one example. “It’s a human problem, not a tech problem,” he says. “There are four reasons to attack: money, power, ideology, and nihilism. I learned the foundations of that in political science at Saint Mary’s. People will do all sorts of things for ego, for power, for position. Understanding how those factors fit together is crucial. The inputs are different, the cultures are different, the values are different, but a politician somewhere else in the world is seeking power just as much as one in Nova Scotia is. In your undergrad, you get a foundation of understanding the world around you that you will use for the rest of your life.”

Despite the serious and complicated subject matter Eric Miller deals with every day, his optimism is striking. He has a rule for using social media: Everything he writes has to be either neutral or positive. “I would rather have something intelligent or useful or interesting to say, rather than another partisan screed,” he laughs. “There’s so much negativity out there. A measured and disciplined voice stands out.”