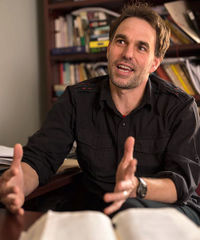 I’ve been travelling by rabbit a lot this year!” laughs Alexander MacLeod. The professor of English and Atlantic Canada Studies has reason for mirth: his story “Lagomorph,” featuring a pet rabbit as a main character, was chosen as the 2019 winner of the internationally-recognized O. Henry Prize for short fiction.

Dr. MacLeod got the news last November while driving to Cape Breton with his History Department colleague, Dr. Karly Kehoe. The pair was en route to Mabou to teach a session of SMU’s Emerging Researchers program to high school students. It’s a drive they made once a week last fall while continuing their teaching duties at SMU.

“I was super excited,” MacLeod recalls, adding that at the time, he didn’t fully appreciate the immediate effect winning the prize would have on his writing career. “It proved to be bigger news than when it landed in the car.”

MacLeod’s win comes at a significant time: the award turns 100 this year, so “Lagomorph” will be included in The O. Henry Prize Stories 100th Anniversary Edition, due out this fall.

Some of the award’s prestige has come from the uncanny ability to identify short fiction classics hot off the press.

As MacLeod explains, “The O. Henry Prize recognized those stories that we now have in our textbooks, but it recognized them when they were a week old, right out of the gate in their first magazine publication.”

“I love the short story form. It can do things that a novel can’t.”

He credits the editors of the British literary magazine Granta, where his story was first published in the fall 2017 all-Canadian issue, with being patient as he struggled to finish this “most stubborn” short story that explores the mysteries of our connection with animals and the compromises of domestic life.

“I tried to quit that thing fifteen times! It was so frustrating, but so rewarding.”

MacLeod’s first short story collection, Light Lifting, was a finalist for the Scotiabank Giller Prize, the Commonwealth Book Prize, and the Frank O’Connor International Short Story Award. He’s currently at work on a new collection that’s one story away from completion.

“I need to lock myself in a room and just bang it out,” he says.

Winning the prize means there hasn’t been much time for writing. In July, MacLeod travelled to Japan to speak at a Canadian Embassy forum on social trends as seen in Canadian short fiction, and he’s been on the road for much of the past year with writing-related events in London, Paris, Ireland, and Spain.

The chair of the SMU English Department, Dr. Goran Stanivukovic, sees the broader significance of MacLeod’s award for the Saint Mary’s community.

“The O. Henry Prize is one of a kind in the world. For a university like Saint Mary’s that boasts an international outreach and vision, this is an occasion to celebrate that vision in a way that adds distinction to the University nationally, and beyond.”

“Alexander’s prize makes all of us proud to be his colleagues.”

Everything’s Coming Up Jennifer! ►
◄ A New Building For An Old Tradition