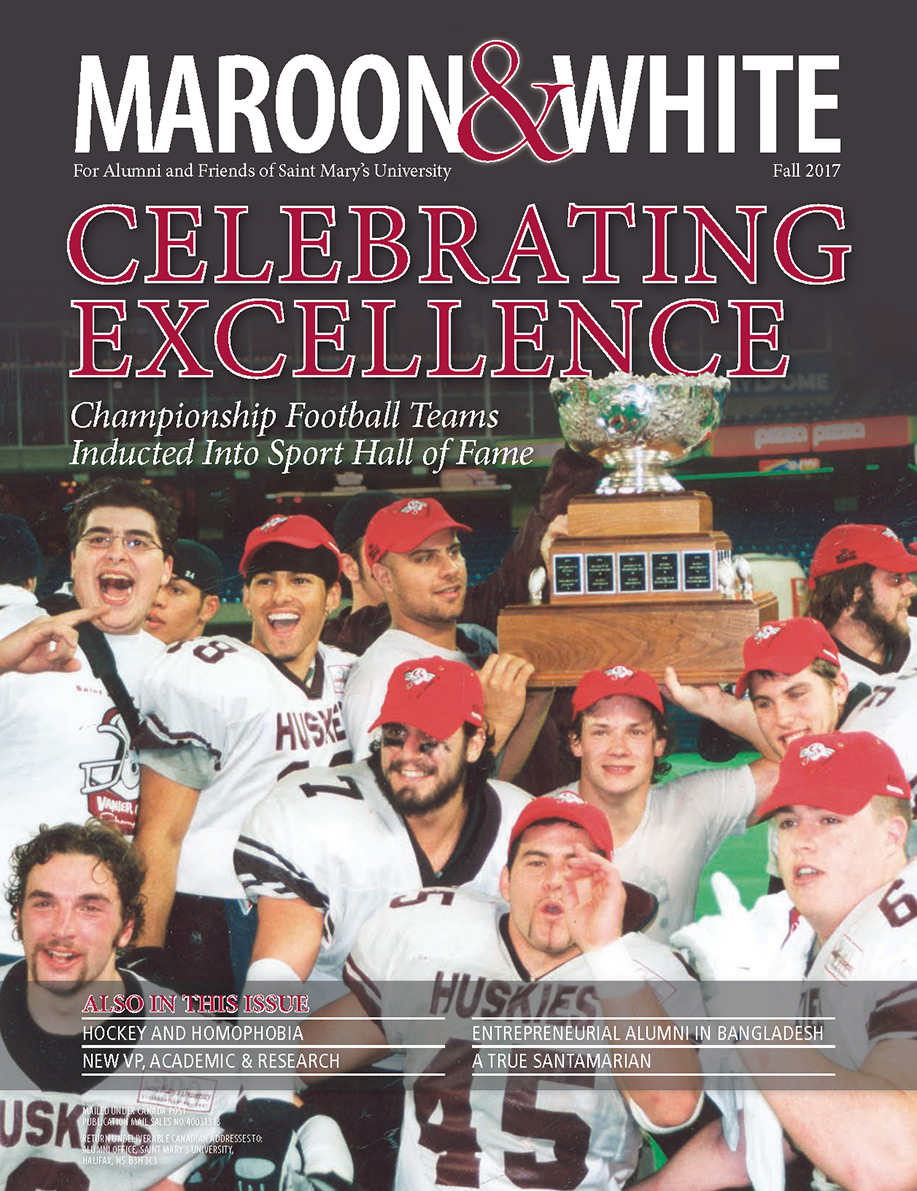 It was an introductory Spanish class at Saint Mary’s University, and the professor wanted students to work on their conversational skills. Up until that January day in 2004, Ben Connolly and Julie Bohemier had always sat on opposite sides of the classroom.

That day, they got paired up. “It was basically like a first date, the questions we were asking one another,” Julie says. “That…

Hockey is for Everyone

Cheryl MacDonald is on a mission: to fight homophobia in Canada’s most popular sport. “Hockey is for everyone regardless of race, ethnicity, religion,” says the Saint Mary's University Arts graduate from 2010, who was also president of her graduating class. But her number one focus right now is to make hockey a more inclusive sport for LGBTQ athletes.

She’s taken on a big job.

When Dr. Malcolm Butler returned to Saint Mary’s University on July 1, 2017 as the new Vice-President, Academic and Research, it definitely felt like a homecoming – and one he’s excited about.

“I’m returning to the place that formed who I am as an academic leader,” explains Butler from his office in the McNally Building. “And I’m pleased that I can pay that back now by…

This happened to Saint Mary’s…

University research often gets a bad rap for being out of touch with the lives of everyday folks. But the work of four Saint Mary’s faculty members, profiled here, flies in the face of that. The applied fieldwork and experiments of these professors, and their students, proves that research can make a difference in the areas of local food, disease diagnosis, and rural sustainability. The applied…

New Inductees to the Sport Hall of Fame

They were the little football teams that thought they could.

And they did. Big time.

In Canadian university football, it doesn’t get any bigger.

This September, Saint Mary’s welcomed new and returning students, from around the corner and around the globe, eager to learn, searching for meaning, and keen to give back to the wider community and world. We gathered together in our Santamarian ceremony to witness our shared commitment to discovery and innovation, academic integrity, and intercultural learning. I took this opportunity to speak…

As my first year serving as President of the Saint Mary’s Alumni Association wraps up, I have a lot of great experiences to look back on. This summer we held our Annual Alumni Golf Tournament at Granite Springs on August 17th. This sold out event hosted 132 golfers and funded 21 deserving students with bursaries.

Saint Mary’s chemical biologist Dr. Clarissa Sit’s research into how to combat antibiotic-resistant bacteria and fungi received a big boost this August as the result of an investment of $171,204 from the federal government. As a result of this funding, Dr. Sit will have access to a high-resolution mass spectrometer, equipment that will increase the success rate of finding new molecules in soil…

Saint Mary’s engineering alumnus Stephen Robinson-Enebeli will always remember where he was on Canada’s 150th birthday: surrounded by friends and family, in the Canadian Museum of Immigration at Pier 21, becoming a Canadian citizen. “The room was overflowing,” he recalls. “I was so moved by the number of people who came in solidarity to welcome new Canadians, and to welcome me.” Stephen…

Students at Saint Mary’s will benefit from a fund set up to honour the late Gerry Beech (BA’68), a proud Saint Mary’s alumnus who graduated with a degree in Political Science. Beech worked for several years as Director of Student Services at the Nova Scotia College of Art and Design before moving to Ontario in the mid-70s for a career in provincial politics. With the help of Dr. Marc Doucet,…

Amy Heim, a PhD candidate in the Faculty of Science, is the recent recipient of a three-year Vanier scholarship worth $50,000 per year. Heim’s work is in the area of Evolution and Ecology, and she was honoured for her research proposal titled: Using traits to enhance plant co-existence and maximize ecosystem services in the green roof environment. A plant community ecologist who specializes in understanding…

Hundreds of visitors from across Halifax flocked to Saint Mary’s University campus to safely enjoy the partial solar eclipse on Monday, August 21. PhD in Astronomy candidate Mitchell Young spearheaded the public viewing event, which provided an opportunity for members of the university community and the public to safely view the partial eclipse through the lens of a telescope or safety glasses. Visitors…

Recent Saint Mary’s graduate Kyle Awalt is headed down under to pursue a Ph.D. in Medicinal Chemistry at the University of Monash in Melbourne, Australia. Kyle, who graduated this spring with a Bachelor of Science in Honours Chemistry, received a Monash Graduate Scholarship and Monash International Postgraduate Research Scholarship, two highly competitive awards worth roughly $70,000 a year. Since…

This summer in Iqaluit, 13 students graduated from the Advanced Management Diploma program. The 10-month program is offered by the Sobey School of Business, in partnership with Nunavut Tunngavik Inc (NTI), a land claims organization. NTI's mandate is "Inuit Economic, Social and Cultural Well-being Through Implementation of the Nunavut Land Claims Agreement." The partnership was established as part…

Saint Mary’s international reach is well known and often results in amazing opportunities for the University and its students. This past June, his Excellency Vikas Swarup, High Commissioner of India (HCI), and the author of the novel Q&A, (later made into the film Slumdog Millionaire) dropped by Saint Mary’s to meet with President Robert Summerby-Murray. He also took the time to talk with some…

Earlier this year, Dr. Kathy Singfield and Dr. Marc Doucet were recognized for educational leadership and teaching excellence. Dr. Singfield, a faculty member in the Department of Chemistry and Associate Dean - Curriculum and Operations, was awarded the Dr. Geraldine Thomas Educational Leadership Award. Dr. Doucet, an Associate Professor and Chair of the Political Science Department, was awarded the…

Saint Mary’s University professor Dr. Linda Campbell and the Bill 59 Community Alliance were recently honoured with the Mel Hebb Hourglass Action Award for their contributions to Nova Scotia’s Accessibility Act. Dr. Campbell and the grassroots disability group worked diligently for two years to improve Bill 59, also known as the Accessibility Act. Their hard work was recognized by the Partnership…

This past summer, 12 Atlantic Canadian university students embarked on a once-in-a-lifetime archaeological expedition in Cuba, spearheaded by Saint Mary’s University’s Department of Anthropology. From June 1 to 17, the students excavated artifacts at Cuba’s historic Angerona Coffee Plantation, a former slave plantation near Havana. The dig—to possibly discover something about the lives of the…