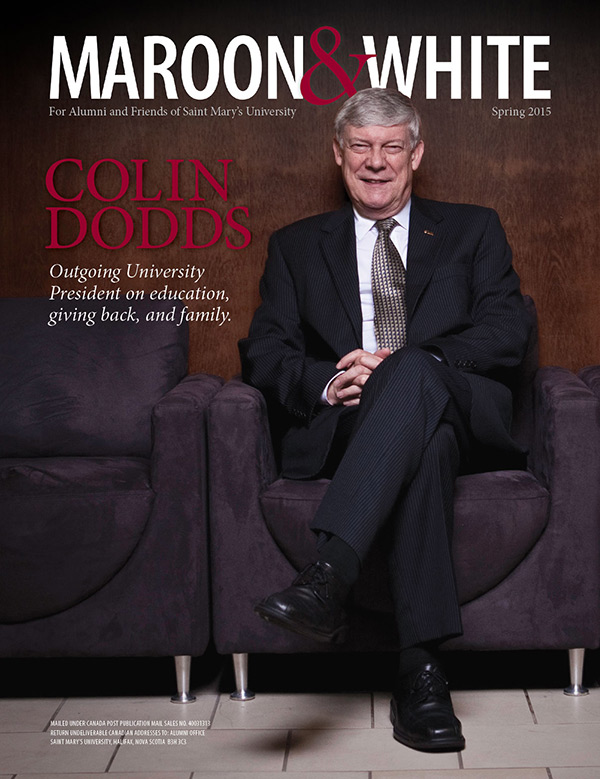 Over the course of the last 32 years, Saint Mary’s University President Dr. Colin Dodds has given much to the University, its students, and the wider Halifax community. Willingly forfeiting decades of evenings and weekends, he’s presided over significant campus expansions, made major contributions to various boards, both locally and nationally, lent his expertise to provincial committees, and…

At her Indian Brook, Nova Scotia home, Dr. Isabelle Knockwood takes out a red tube. It was given to the Mi’kmaw elder when she was awarded an Honorary Degree—a Doctor of Civil Law—from Saint Mary’s University at Fall Convocation in 2013.

“In honouring Isabelle Toney-Shay Knockwood with this degree we are also honouring her ancestors, her parents, children and grandchildren, and…

What it takes to become extraordinary

Since your first half-marathon in 2003, you’ve run marathons, 100Ks, 125Ks and 24-hour races, landing on many podiums. How has running enhanced your life?

Oh my. I’ve seen the world and met so many of my close friends through running. People say I’m humble to the point that I don’t realize the positive influence…

For many young people, especially now, the career path on which they start is often winding. And sometimes it leads them where they never imagined themselves going. For Lindsay MacPhee, that sentiment certainly rings true.

MacPhee, an environmental engineer by trade, and a Saint Mary’s graduate, has driven off that road and onto something completely different—she’s opening Atlantic…

Social Entreprenuer, Author, Philanthropist. That’s how Fergus Dearden describes himself on his Twitter feed. He could also have added Voracious Learner, as the 31-year-old routinely educates himself in a wide variety of subject areas. He has studied Japanese, and is currently learning all he can about investment banking and computer programming languages.

It’s All About the Journey

Danièle (Talbot) Cruickshank has had many lives in one. A gifted musician and dancer from a young age, Cruickshank earned a ballet scholarship when she was 15. This opportunity took her from her childhood home of Chambly in Quebec (think world-famous beer) to the bustling city of Montreal. When she graduated from Les Grands Ballets Canadiens program at age 18, she continued to dance part-time,…

I wanted to use…

From the President of the Alumni Association

Being President of the Saint Mary’s Alumni Association since October 2014 has given me many opportunities to interact with fellow alumni, faculty and especially with the students. It is a great pleasure to spend time with our future leaders. I attend as many events as I am able.

Last September I was assisting our Alumni Office with Welcome Week for new students and I saw a familiar face.…

The Burke-Gaffney Observatory unveiled a very special telescope last fall. The Planewave 0.6-metre CDK24 telescope is the second-largest telescope on a Canadian university campus, and the first in the world to be synced via software to social media. This allows it to be monitored and controlled by Facebook and Twitter users worldwide. Named in honour of its major benefactors, Dr. Ralph M. Medjuck…

In February, after an international search, Dr. Robert Summerby-Murray was chosen as Saint Mary’s University President-Elect. Born in Christchurch, New Zealand, Summerby-Murray has been in Canada since the 1980s, when he received his Ph.D. in Geography from the University of Toronto. He has served in a number of senior academic roles, including as Dean of Social Sciences at Mount Allison University…

On March 13, Canadian writer Emma Donoghue delivered this year’s Cyril Byrne Memorial Lecture. The annual lecture celebrates the life and spirit of Cyril Byrne, who during his 35-year career as an English professor at SMU, helped establish the school’s Atlantic Canada studies program and the D’Arcy McGee Chair of Irish Studies. Donoghue is an Irish-born writer whose work has been translated…

Dr. Paul D. Sobey is following in the footsteps of his father, Dr. David F. Sobey, who served as Saint Mary’s Chancellor from 2008 until 2010. Born in Halifax, but raised in New Glasgow, Dr. Paul D. Sobey, FCA, B.Comm, D.Comm, worked through various positions in Empire and its subsidiaries, assuming the role of Vice-President and Secretary in 1985, and President and CEO of Sobey Leased Properties…

International students studying in Halifax now have expanded opportunities to enter the work force and stay in Nova Scotia. A new program, launched in February with help from the Hong Kong-Canada Business Association Atlantic Section, offers international students at the Sobey School of Business valuable work experience through a paid internship program with the Halifax Port Authority. This new…

Saint Mary’s has a long relationship with China’s Beijing Normal University – Zhuhai (BNUZ). Since 2002, hundreds of students from BNUZ have attended Saint Mary’s, with SMU students also able to access a study-abroad program at BNUZ. In February, a new partnership was announced with SMU’s Faculty of Arts. This latest development between the two universities is a credit-transfer agreement.…

On the Cutting Edge

The David Sobey Centre for Innovation in Retailing and Services was launched in style on March 10 at an invite-only event attended by over 150 Canadian business luminaries. David Sobey, for whom the new Centre is named, was recognized through remarks from master of ceremonies, Dean Patricia Bradshaw. “The launch of this Centre honours the region’s tradition of business excellence in the retail…

Combine 100 high school or post-secondary students with an interest in entrepreneurship, a handful of keen mentors, and 50 Nova Scotian communities. What have you got? Startup 100, a unique partnership between the Province of Nova Scotia, the Sobey School Business Development Centre, and Enactus Saint Mary’s. The program began February 20, and will continue for 100 days with a two-fold goal: foster…

Improved Supports for Students with Disabilities

For 30 years, Saint Mary’s has played a leadership role in ensuring that higher education is accessible to students with disabilities. Back in 1985, when the Atlantic Centre was first established, it began by helping 13 students. That number has grown to over 200 students today. A passionate supporter of services for students with disabilities, and a former member of the University’s Board of…

Establishing a Community of Responsibility

It isn’t easy to take a stand against sexualized violence—even for a self-described “big guy” like Amali Armony, President-Elect of Saint Mary’s University Students’ Association (SMUSA). Thanks to training received through an innovative program called Bringing in the Bystander, Armony and other members of the Saint Mary’s community are now poised to speak up and step in.

Sobey School of Business students devised improved agricultural methods, a financial literacy program for inmates, public-use cell phone-charging stations, and a social media platform for Chinese ex-pats, and they took home four of six BOYNECLARKE Innovative Ideas Awards on February 23 at the Westin Nova Scotian in Halifax. They swept the social innovation category, winning all three awards in that…