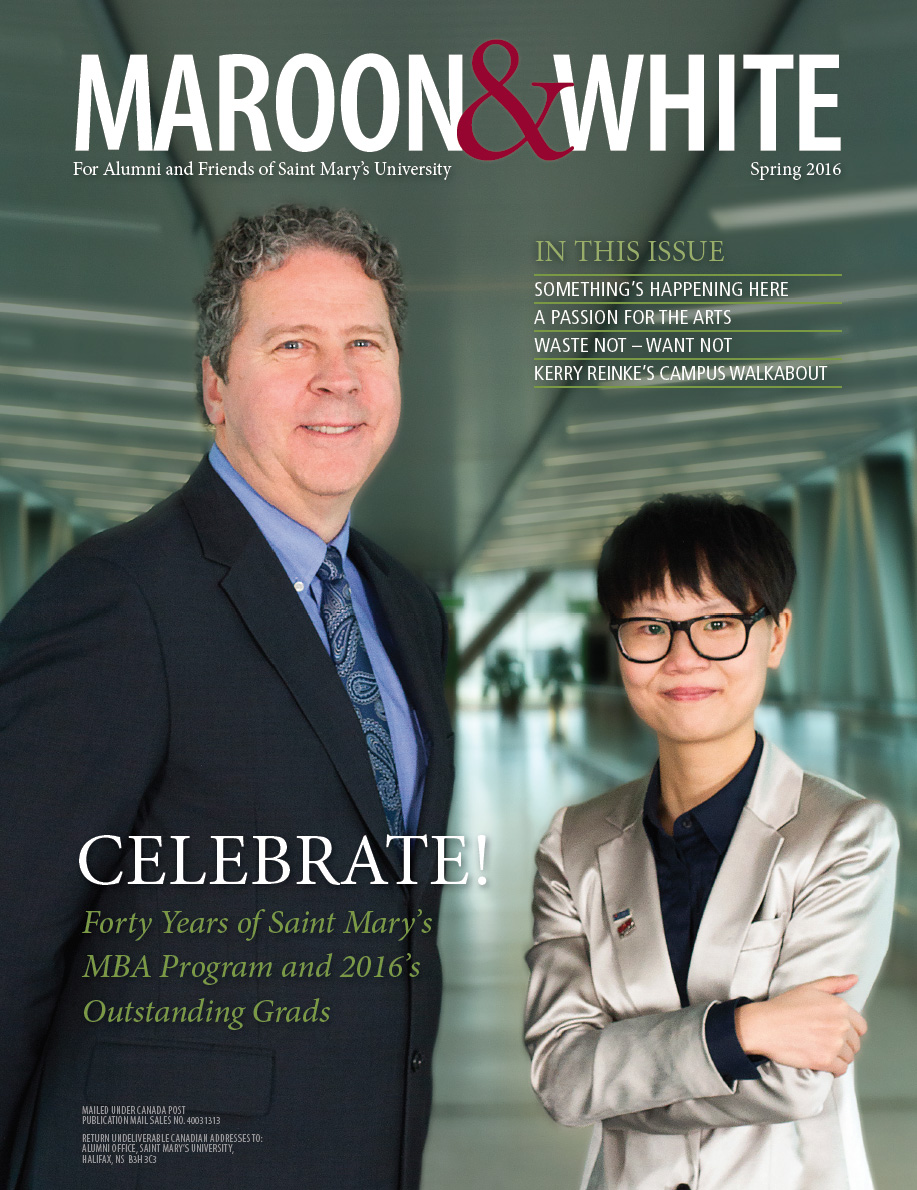 Maroon & White is published for alumni and friends of Saint Mary’s University. Circulation: 29,000

Meet some of Saint Mary's newest alumni. All six of these featured grads have made a big impact in their time at Saint Mary's and will continue to be bright lights in their chosen fields.

Another thing these outstanding individuals have in common is their belief that attending university is about more than just sitting in a classroom. Everyone in this small group gave of themselves as…

Turning 40 is a big deal in anyone’s book. Some of us pretend it’s not happening at all, and some of us pull out all the stops and party like it’s 1999. For the Master of Business Administration program at Saint Mary’s, the big four-oh really is something to celebrate – not just with a party, but with new and exciting changes that promise to reinforce the program’s outstanding reputation…

When Dr. Rohini Bannerjee was young, she thought she might grow up to become a medical doctor. She did become a doctor, but not the kind she expected. As a student she volunteered as a French reader at the IWK, reading regularly to a little boy. One week, his bed was empty, and the nurses told her he had died. Medicine, she realized, was not for her.

Bannerjee went on to study French,…

You could forgive the average Saint Mary’s University student for not knowing who Bob Hayes was.

His tenure as legendary football coach, director of athletics, and builder of a college sports dynasty long predates the birth of most of today’s Saint Mary’s students, so why would they know who he was? And why would they care?

Well, there are plenty of reasons for students…

One of the Huskies’ first black football players says positive experiences at Saint Mary's allowed him to “think big and reach high.”

If you were black and living in Halifax in the 1960s, life was, to say the least, not easy. This isn’t to say racism doesn’t still exist today in the city, but as Blair Lopes BA’69 puts it, discrimination was very much “alive and well” at…

Ahead of the Game in Welcoming Refugees

The Syrian refugee crisis is bringing Canadians of all stripes together to help settle tens of thousands of new families over the next year. This influx of newcomers is also shining a spotlight on certain organizations and institutions who are already doing a great job of welcoming people to our region.

Saint Mary’s University is one of them. With a student body that is 30% international…

Dr. Rob Singer smiles as he examines a beaker filled with sludge from a paper mill’s recovery boiler. What most people see as chemical waste looks like a golden opportunity to the Saint Mary’s University Chemistry professor and his collaborators at Thinking Robot Studios (TRS), a Nova Scotia company that uses 3D printers to manufacture patient-specific, biomedical devices like artificial hips…

An astronomy and physics professor at Saint Mary’s University, Gallo was…

During the last six months Saint Mary’s has celebrated many academic and athletic achievements. Our Burke-Gaffney Observatory has received accolades for taking space image requests from Twitter users and tweeting back pictures. Dr. Luigi Gallo, an Astronomy and Physics professor, has had a part in the Japanese launch of ASTRO-H, checking out black holes. And our Enactus Team continues to represent…

As Syrian refugees continue to arrive in Nova Scotia, our Language Centre has stepped up to smooth their transition by offering beginners’ courses in Arabic for members of the campus community as well as the general public.

“Even being able to say hello in someone else’s language can help put them at ease in a difficult situation,” says Zak McLaren, Director of the Language Centre.…

A $2 million gift from the Joyce Foundation in December 2015 will create a legacy of support for students with disabilities and keep Saint Mary’s affordable for all deserving students. A significant portion of this transformative gift is designated for students registered with the Fred Smithers Centre of Support for Students with Disabilities. The remainder goes to support economically disadvantaged…

Rural communities seeking help solving complex social problems like outmigration and unemployment need to look no further than the Change Lab Action Research Institute (CLARI), soon to be up and running in Saint Mary’s University’s Atrium. The CLARI hub was conceived as a way to drive economic development by connecting rural communities and small business with a network of experts and researchers…

The non-profit landscape shifted at Saint Mary’s University’s One World Alumni Awards Gala during Homecoming 2015 with a remarkable display of giving by Brigadoon, a non-profit camp facility for children, youth, and families living with a chronic illness, chronic conditions, or special needs. When called upon to receive the top award of $10,000, Brigadoon’s founder David McKeage BComm’91…

As a collegiate football player and coach, James Colzie III accrued a wealth of experience by taking part in two national championships, six conference titles, and 12 bowl games. As the new head coach of the Saint Mary’s Huskies football program, he’ll put that experience to good use bringing Huskies football back to prominence in the CIS (Canadian Interuniversity Sport).

A talented poet, playwright, and literary critic, Dr. Clarke is an officer of the Order of Nova Scotia and the Order of Canada. He has also received the National…

“There’s a first time for everything!” That was the reaction of Enactus Saint Mary’s co-president Ali Algermozi on Friday, February 26, when the Enactus Saint Mary’s team made history, going up against 13 Enactus groups from universities in Atlantic Canada to bring home five big wins: first place trophies in all four categories at the Enactus Regional Competition, plus the Woman Leader…

Taking the Stress from the Test

A collaboration between Saint Mary’s University and Halifax Public Libraries will make the Candian citizenship test far less intimidating for a small group of immigrants.

“The test is tough even for those born in Canada,” says Saint Mary’s alumnus Jonathan Shaw. “Imagine how difficult it is for someone who speaks English as a new and second language.”

A Gift That Will Grow the Economy

The Master of Technology Entrepreneurship and Innovation (MTEI) program at the Sobey School of Business received some exciting news in October 2015. Alumnus Mike Durland (BComm ’87) announced two gifts totalling $1.5 million. One from Scotiabank – where at the time, Durland was CEO, Global Banking and Markets – and one from Mike and his wife Catherine, also a Saint Mary’s graduate (BComm…

Thanks to an endowed gift from the family of the late Dan Alexander MacLennan, more than 300 astronomers and stargazers crowded into the McNally Theatre Auditorium on October 17th. They were there to hear award-winning astronomer Alex Filippenko share his insights on exploding stars and the expanding universe.

“We were very excited to host the inaugural Dan MacLennan Lecture,”…

Another Star on the Horizon

Saint Mary's University’s Department of Astronomy and Physics is excited to announce that Nobel Laureate Arthur B. McDonald will be the guest speaker for the second annual Dan MacLennan Lecture on Friday October 21, 2016.

Arthur McDonald, a professor emeritus at Queen's University in Kingston, Ontario, shared the 2015 Nobel Prize in Physics with Takaaki Kajita of the University…

A Home Away from Home for Indigenous Students

At a dedication ceremony in early February, Mi’kmaw elder, author, and Saint Mary’s alumnus Dr. Isabelle Knockwood (BA’92; DCL’13) helped the University celebrate the opening of our new Indigenous Student Space. According to Elora Gehue, President of Saint Mary’s Aboriginal Society, this dedicated on-campus location for indigenous students to meet, work, share, and collaborate is “a…

Dr. Lindsay Carmichael was too excited to write even 140 characters after an awards dinner in the fall of 2015 to announce the winners of last year’s Lane Anderson Award. Her author friends, on the other hand, lost no time tweeting that Carmichael’s book Fuzzy Forensics: DNA Fingerprinting Gets Wild had been named the best science book in Canada in the young readers’ category.