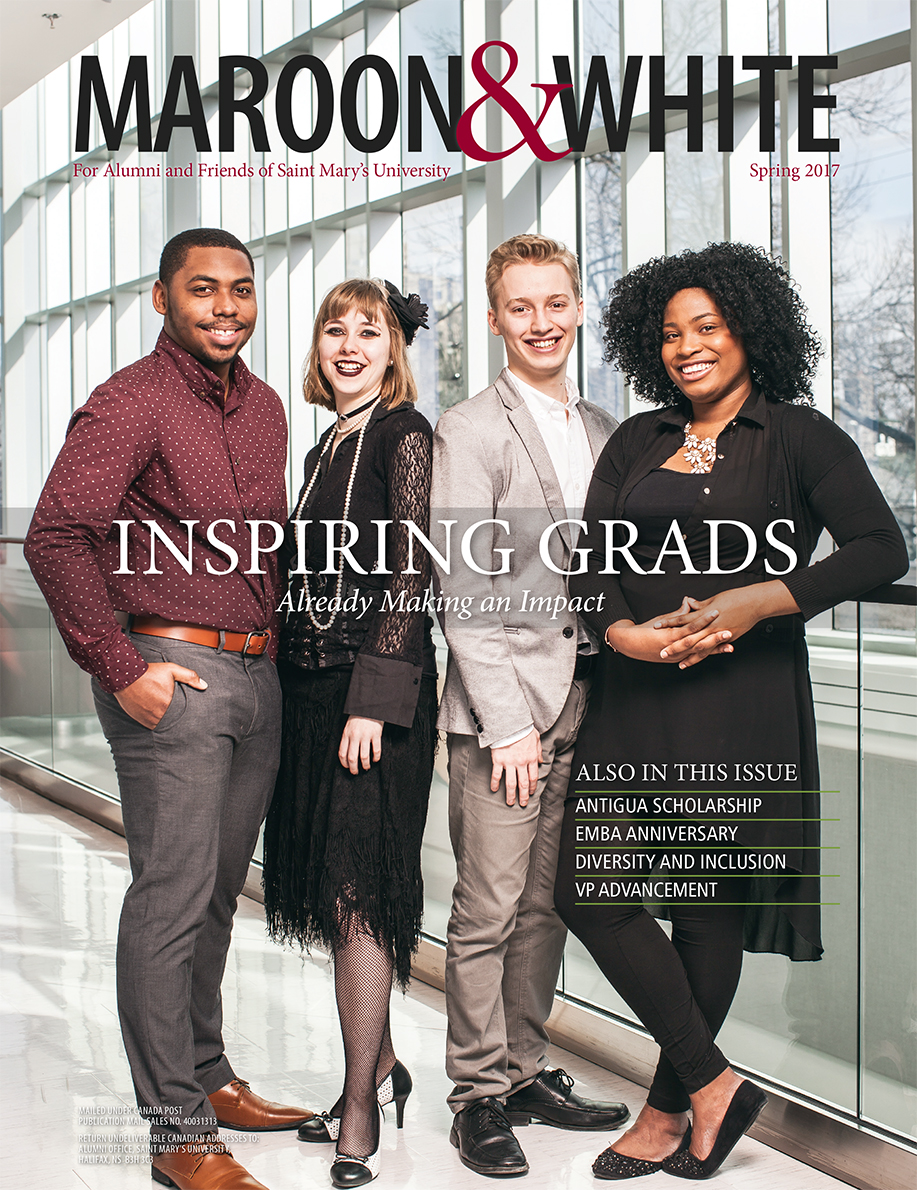 Maroon & White is published for alumni and friends of Saint Mary’s University. Circulation: 15,000

A Most Promising Quartet

If there’s one thing that these Saint Mary’s newest alumni have in common, other than exceptional academics and extremely well-rounded resumes, it’s that each one is uniquely inspiring. All four are not only poised to make a huge impact, but are actively welcoming the opportunity to make the world a better place. Keep your eye on these four names in the years to come!

Exciting Scholarship Opportunity for students from Antigua and Barbuda

The importance of getting a good education was modeled early in Lady Williams’s (BA’86) life. The Saint Mary’s graduate was born in Antigua and Barbuda, but moved to Ontario with her family at age three so her parents could continue their studies—Carleton University for her father and Ryerson Polytechnic, now Ryerson University, for her mother—before moving back to Antigua.

In the late 1980s, Linda Moxsom-Skinner had three small children and a full-time job. She hadn’t had a chance to finish high school or complete an undergraduate degree, but had landed a good position in the Advancement department of Dalhousie University. She knew that in order to grow her career she would need to further her education.

Erin Sargeant Greenwood arrived in Halifax in early February, just before a slew of winter storms saw closures across the province. “Although it might have seemed like it, I did not bring the snow from Ontario,” laughs Sargeant Greenwood, the University’s new Vice-President of Advancement.

Born and raised in Central Ontario, in the Kingston area, Sargeant Greenwood completed her…

Words from the Roundtable

Immigration and innovation were the hot topics on January 26, 2017, when Saint Mary's welcomed government Ministers Navdeep Bains, Lena Diab, BA’85, Scott Brison, and Ahmed Hussen to a roundtable discussion that included faculty, staff, students, members of the University’s Board of Governors, and external stakeholders.

“It was an historic event that gathered together a wide cross…

I am delighted to welcome you to the latest edition of Maroon & White.

It is a pleasure to lead an organization as vibrant as Saint Mary’s University. Our Strategic Plan (2016-21) strengthens our vision ‘to be the university of choice for aspiring citizens of the world’ and our mission to offer academic programs and engage in research that serve both local and international communities.…

I am excited and proud to serve as the new President of the Saint Mary’s Alumni Association. Since the Fall of 2016, I have been privileged to meet many alumni from across the globe and to engage with faculty, staff, and students within the University. This experience has been immensely rewarding.

In February, we officially welcomed our new VP Advancement, Erin Sargeant Greenwood, to…

The Return of a Treasure

Remnants of an old gateway were all that remained of the Belgian Abbey of Salzinnes until 1998, when alumna Judy Dietz (BA’84, MA’06) discovered a 450-year old illuminated manuscript in Saint Mary’s University’s Rare Books collection. A hand-scribed choir book containing 240 parchment folios with music and text, the Salzinnes Antiphonal was likely brought to Nova Scotia in the mid-1800’s…

Thanks to a $1.1 million investment from the Federal Government, Saint Mary’s is now the headquarters for the Change Lab Action Research Initiative (CLARI), a post-secondary education partnership offering a network of academic experts, research resources, collaboration spaces, and communications technology. “The Change Lab Action Research Initiative is a great example of the kind of collaboration…

A Reputation for Research

The exceptional research carried out by Saint Mary’s faculty and students is receiving lots of social media praise by those who attended the Research Expo in March. In related news, Saint Mary's University has shot up in the rankings of the well-regarded Research Universities of the Year (RUY) report by Toronto-based consultants Research Infosource. Their 2016 report, released in October, shows…

Saint Mary’s friend and alumna, Marsha Sobey (BEd’82), was quick to share the credit when receiving an Alumni Association Distinguished Community Service Award for the profound impact she has had on Saint Mary’s University, Landmark East School, the Children’s Wish Foundation, and the IWK Health Centre. “It’s a real honour to receive this award,” she said, speaking at last fall’s…

The annual Cyril J. Byrne Memorial Lecture took on a new dimension this year, with hundreds of Haligonians taking part in a special two-night celebration featuring Booker Prize-winning novelist Yann Martel. The author of Life of Pi, Beatrice & Virgil, and the new novel The High Mountains of Portugal, Martel filled the Halifax Central Library’s Paul O’Regan Hall to capacity on March 23, for a…

Looking for a scientifically approved dose of fun? Look no further than Dr. Rob Thacker’s weekly science column as part of CBC Radio 1 Mainstreet in Halifax. Dr. Thacker is a Professor and Tier II Canada Research Chair in the department of Astronomy and Physics at Saint Mary’s, and the Acting Director of the Institute for Computational Astrophysics (ICA). His focus for the new radio gig is computing,…

Sobey School of Business student Ana Paula Mercado Farell was thrilled to be part of the winning team for the first Retail Concept Competition, organized in March by the David Sobey Centre for Innovation in Retailing and Services. She was doubly pleased to receive an innovation award, courtesy of retail futurist Doug Stephens, a member of the advisory board for the David Sobey Centre.

Almost 150 student entrepreneurs from post-secondary institutions and high schools across the country came together at Saint Mary’s in February 2017 to share best practices and learn from national business leaders at the third annual Starting Point Student Entrepreneurship Conference. With a focus on fostering innovation and encouraging students to think big, Starting Point 2017 featured master classes,…

Business and government leaders, entrepreneurs, students, faculty, and staff gathered in Halifax last fall to celebrate the release of a report re ecting the Sobey School of Business’ economic, social, and intellectual impact on the province of Nova Scotia.

Halifax MP Andy Fillmore was back on campus on March 2nd to announce more than $480,000 in funding from the Government of Canada for OPtions (Overcoming Poverty) Youth, a program ordered by the Sobey School Business Development Centre and Saint Mary’s University’s Enactus team. The program helps at-risk youth develop employability skills through mentorship, entrepreneurship training, and on-the-job…