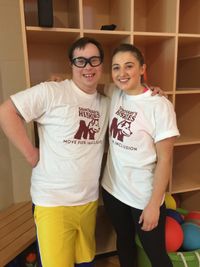 This happened to Saint Mary’s Alumni Nick Foley just a couple of weeks after his daughter, Brynn, was born. Brynn was identified as having Down Syndrome shortly after her birth in September 2012.

In that moment, the seeds of Movement For Inclusion (MFI) were planted. “I knew I had to do something,” Nick says. “I came up with the idea of riding my bike across the country to raise money for charity, raise awareness, and give speeches and resources for free to different groups who wanted to promote inclusion.”

Nick’s 2015 Ride for Inclusion started on April 22nd in Victoria, BC and ended on July 26th in St. John’s, NL. “Up to that moment I wasn’t even a cyclist,” he laughs. “I didn’t even own a bike.” But Nick explains that “when your why is big enough”, you can accomplish just about anything.

The ride raised more than $50,000, all of which went to charities that focus on the holistic needs of persons with physical and cognitive exceptionalities. These include Best Buddies, a global volunteer movement that creates opportunities for one-to-one friendships and leadership development for people with intellectual and developmental disabilities, and the Sunshine Foundation, which fulfills custom-made dreams for Canadian kids living with severe physical disabilities or life-threatening illnesses.

Today, MFI is in the process of becoming a registered charity. “It’s got everything to do with Hannah, really,” laughs Nick. Hannah Stienburg is a varsity volleyball player and third-year business student. She is also Hockey Coach Trevor Stienburg’s daughter and the leader of Huskies Move for Inclusion.

It was during his bike ride that he and Hannah met. Nick planned a stop at Saint Mary’s where he had played hockey from 2000 to 2004 and graduated with a BA in History. He spoke at SMU and connected with Hannah, who wanted to start a program to bring athletes and kids with exceptionalities together to play games and make friends.

It was a match waiting to happen! Since 2015, and about 12 times a year, varsity athletes from the SMU volleyball, hockey, football, soccer, basketball, and rugby teams spend time building physical literacy for local children living with exceptionalities so they can learn to be active.

Last year, 20 kids took part, and more than 50 varsity athletes volunteered. “MFI is designed for kids with any special needs, anything from a minor learning disability to a more major physical disability,” says Hannah, who adds that they play games like tag and hide and go seek—games that every kid can play by making simple adjustments.

Nick provides feedback and support with sponsors and logistic, but gives credit where it’s due. “Hannah’s the champion here,” he says. “She does all this while being a varsity athlete and carrying a full course load.” In fact, the pressure is really on for Hannah this year. As a U SPORTS Academic All Canadian recipient, she must maintain an “A” average in her academic course load while competing in her varsity sport.

But in Hannah’s mind, it’s all worth it. Participation, by both participants and volunteers, is growing every year and the impact is so tangible. “You take those kids who are left behind and you bring them here. They make friends, and it’s like being part of a team.” Hannah adds that having MFI happen at the University makes post-secondary education more accessible. “Suddenly going to University is an option or a possibility, in a way those kids might never have considered.”

It’s fitting that the very first MFI program started with Huskies volunteers. “I started the journey of becoming who I am today at Saint Mary’s,” says Nick. “I understood that I could stand on my own two feet. I didn’t have to conform. I could be who I am.”

Hannah agrees. “The platform we have as athletes and the resources we have all across campus made this idea a reality. Nick and the President and the athletic department—all these parts of the university made it come together. Here, you’re not just a number.”

MFI chapter in every province and

to make all programs free for colleges, universities, and high schools across the country. “All kids have value and matter. We all do things differently. To me, it’s acceptance without bias.”