Sarah Jamer, far back right (blue blouse), along with the rest of the 2016 BMO Millennial Advisory Council 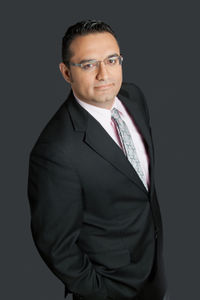 The Council was formed as a joint initiative between the Bank of Montreal and Catalyst Canada—the leading non-profit organization advancing women and inclusive workplaces. The idea was that millennials, a group which is projected to make up to 50% of the workforce by 2020, should be involved in shaping a corporate culture that embraces and reflects the importance of equality, inclusivity, and diversity.

The Council members came together in Toronto that November for the Catalyst Canada Honours Conference, an annual event that explores and celebrates ways to close the gender gap and build inclusive workplaces in Canadian business.

“I know this sounds naïve, but I honestly didn’t think gender bias still existed,” says Jamer. “I didn’t experience or observe bias or discrimination in my university life, so I never in a million years believed one of my male colleagues would get paid more than I would purely, based on gender.”

After a series of panel discussions, workshops, and roundtable meetings that explored the issue of gender equality, Jamer realized there was still a lot of work to be done. “One thing that the experience really highlighted for me is that although things have come a long way for women, not everything has been solved.”

Jamer says that while they didn’t come up with the single magic bullet to address these issues, there were plenty of actionable suggestions. “At that time, I was head of the Commerce Society, and a really useful take-away for me was the idea that when we planned events, we needed to carefully consider their make-up. Were we continuously having older white males speaking?”

She also championed the idea that universities should strive for equal and diverse representation on their boards.

In 2016, a new Council was selected, but previous members were invited to bring a colleague to a special event in Toronto that included networking with BMO and Catalyst executives and a full-day workshop. Jamer chose to bring Nicole MacPherson, a Saint Mary’s Commerce student who received a Student Leadership Award for her work with Enactus, Model UN, and the Business Development Centre.

“The brilliant thing about how the Council works is that we’re learning new things, and BMO and Catalyst are keeping us in the loop and learning from our insights,” Jamer says. “We’re also charged with bringing the dialogue back to our communities.”

The experience influenced Jamer’s own career path after her graduation in 2016. She took a job as a business development consultant at David Aplin Group, a company that has a high number of female leaders within it.

“I chose a company that focuses on development, mentorship, and sponsorship,” she says. “Having mentors who help me define and achieve goals, and sponsors who look for the opportunities for my voice to be heard, has been invaluable.”

And while Jamer believes that gender equality and diversity need to become a priority in Canadian workplaces, she is not a fan of quotas. “I believe in targets, not quotas. People should be hired because they have the skill set to do the job, not because of their gender.”

This is something that Saeed El-Darahali BSc’02, MBA’04 agrees with whole-heartedly.

He’s the President and CEO of SimplyCast, one of the world’s top platforms for marketing automation. When he was 12 years old, his family emigrated from Kuwait to Canada, where his father, an engineer by trade, and his mother, a teacher, were unable to get work in their chosen professions. As a teen, El-Darahali worked several jobs to help support his family. He says that, in part, his entrepreneurial spirit was forged by the desire to create opportunities for job seekers who have skills but lack experience.

El-Darahali has made a conscious commitment to reflect diversity and inclusion in his business, but not through imposed quotas. “At SimplyCast, we believe in hiring the best person for the job,” he explains. “For us, that means we have employees with different levels of experience and education in a wide range of ages representing about a dozen different countries.”

El-Darahali’s vision reaches outside his own company. As the Chair of the Immigration and Retention Committee for the OneNS Coalition, he spreads the message that a diverse and inclusive workforce is beneficial on many levels. “Employers who value diversity and inclusion are building capacity not just for their own businesses, but for Nova Scotia as a whole,” he says. “They increase market share and create a satisfied, diverse customer base.”

As the special guest speaker at Saint Mary’s Winter Convocation, El-Darahali talked about how much trouble he had finding work right out of school. “I promised myself that when I started my own company, I would hire as many youth as humanly possible and become the model on how to train the next generation of leaders.”

He’s done more than that. El-Darahali walks his talk when it comes to diversity. SimplyCast has hired people with no formal education, people over the age of 50, people with disabilities, and people from China, Kuwait, India, Iran, and Palestine, as well as people from Charlottetown, Kentville, and Truro. “No matter your ethnicity, gender, age, national origin, disabilities, sexual orientation, education, or religion, we respect you as a person. Your ideas are valued and listened to.”

For El-Darahali, there is no question that his company is stronger and more profitable because of the diversity within it.

“Diversity of human capital creates diverse thought, ideas, and innovations. Diversity in the workplace is about much more than gender, race, or sexuality; it’s about what results from such a wide range of knowledge, experiences, and perspectives,” he says. “If you don’t make diversity a priority, you’re holding yourself back.”