L to R, alumnus Rudolph Davis BA’84 and Principal of St. Joseph’s Academy, Marie Braswell, Director of Admissions and Recruitment at Saint Mary’s and Joann pose for a picture at the Alumni reception in Antiqua and Barbuda in Oct 2016. 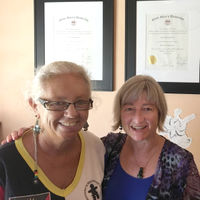 Susan Summerby-Murray (right) stands with Joann in her office.

Warmth was one part of what Boulos-Callias was looking for in 1978 when she ventured from Antigua and Barbuda to Halifax for her Bachelor of Arts at Saint Mary’s. She was 17 and following the path of her older brother, who had arrived at Saint Mary’s the year before. She’d never been to Canada. Never been on an elevator. Never felt snow.

During the first dusting that winter, the girls on Boulos-Callias’s floor bundled her up “like the Goodyear Blimp” and took her to the football field. “They scraped some snow off of the bleachers and gave it to me so I could touch it.”

Soon enough, Boulos-Callias wasn’t only right at home at Saint Mary’s; she was a school leader — a character, a comrade, and a residence don.

She graduated. Went home. Then returned to Saint Mary’s for her Bachelor of Education. She repeated the process for her Masters of Education. Home and back. In between, she helmed schools and trained teachers.

“If they had a Ph.D in Education,” she says, only half-joking, “I would probably have come back.”

Today, Boulos-Callias has built a school of her own — Saint Anthony’s Secondary School in Cedar Grove. And her enduring romance with Saint Mary’s has never cooled.

Keith Hotchkiss met Joann Boulos-Callias at Saint Mary’s back in 1978. She was in Vanier’s A House. He was Director of Residence.

“You got to know the international students in particular,” says the recently retired Student Services head. Hotchkiss remembers Boulos-Callias as “vibrant and intelligent.” The two have stayed in touch over decades.

Hotchkiss is a Saint Mary’s lifer. He arrived in 1969 for football and a Bachelor of Arts in History. In 1973, he was on the first Huskies team to win a Vanier Cup national championship. He finished his degree, but never left his second home. He retired last July after 42 years in Student Services. He still works out at the Homburg Centre and gets his hair cut at Luigi’s in Henn Alley.

Hotchkiss started recruiting in the Caribbean and Bahamas in the mid-1990s, when Boulos-Callias was in the teacher education department at Antigua State College. In 2000, she became the principal of Saint Joseph’s Academy, an all-boys school — the first woman in the job and first head not from a religious order.

Saint Mary’s was one of the early schools from the Atlantic region to attend university fairs on the island of Antigua. Boulos-Callias always brought her students. Soon, she started hosting the annual Antigua and Barbuda alumni meet-up at her home.

Hotchkiss found he never had to go too far to boost the reputation of Saint Mary’s in the Caribbean and Bahamas. He discovered dedicated 1970s and 1980s alumni like Boulos-Callias — many of them teachers — all over the place.

“That was a real advantage that we had. They could speak to Saint Mary’s and their experience.”

It was around this time, Hotchkiss recalls, that Boulos-Callias and her husband started talking about building a school of their own.

“I always wanted my own school,” she says, “with my own vision.”

“They were saints!” laughs Boulos-Callias.

But, Boulos-Callias adds, Catholics pray to Saint Anthony for help in finding things, much like the young people who attend SASS are encouraged to find themselves and their passions through education.

A walk around the SASS campus reveals some of its 300-odd students immersed in studies, doing yoga, playing chess, singing, or passing around a soccer ball.

It is one of the only Antigua and Barbuda schools to offer A-levels, advanced academic study for higher-level students. Several SASS students have gone to Saint Mary’s.

For Antiguans and Barbudans to leave their tiny country — 90,000 inhabitants on two islands, which combined are about the area of Kejimkujik National Park — isn’t unusual. There’s no university campus there. Students attend the University of the West Indies campuses on Barbados, Trinidad and Tobago, or Jamaica, or “go abroad” to the U.S., the U.K., or Canada.

The move isn’t cheap, but it’s worth it for families.

“Some parents would put second mortgages on their homes to make sure their kids got an education,” Hotchkiss says. “And the kids knew that, coming here. They knew what their parents had done. And they did well.”

The move also isn’t easy. Halifax is more than 3,000 kilometres from Antigua and Barbuda.

A parent stopped Boulos-Callias in the grocery store the other day; his daughter had been accepted to Saint Mary’s and he was making sure that it’s a good place.

“I reassure parents all the time that it’s as safe as can be. And I make sure they know that their child is going to have someone looking out for them.”

To wit: she relays the story of missing her first ever class. Sociology. She was rushing to get a paper done for another class. “Do you know? He tracked me down! The prof! He was worried I was sick. He called the residence!”

There are 254 Caribbean and Bahamian students at Saint Mary’s this year; 52 from Antigua and Barbuda. It’s a small but mighty crew, and these students make a distinct impact on academic and student life at Saint Mary’s.

Boulos-Callias’s daughter Ariel is a student now. She will graduate in May 2018 with a Bachelor of Science and a Diploma in Forensic Science. She’s been a Residence Assistant for two years, just like her mom.

“Coming from a small island,” says Boulos-Callias, “(Saint Mary’s) is so international. So they don’t feel like they are a small, isolated pocket of non-Canadians.”

She even thinks winters are easier on Caribbean and Bahamian students with Saint Mary’s “gentle introduction” to the cold by way of its connected buildings.

“Even, in the midst of winter,” Boulos-Callias says wistfully of her warm catwalk, “I could stand there and pause for a while and it felt like it was home.”

Susan Summerby-Murray (right) stands with Joann in her office.
A Most Promising Quartet ►
◄ Exciting Scholarship Opportunity for students from Antigua and Barbuda